Historic places tourism in this intriguing small city found between Birmingham and Atlanta (with over 70 photos).

From a historic-places point of view, present day Anniston is one of the most captivating cities in Alabama.

Since my childhood, what I remembered most about Anniston was the tree-lined median spanning several blocks along the primary route through the city. That street is Quintard Avenue.

Until the day in May 2020 that I wondered around the city to take the photos for this website, I don’t remember ever seeing anything in downtown Anniston that was not located on that busy, yet lovely avenue.

So, with my camera in hand, I parked at a church on Quintard, and explored an area of about 40 blocks on my bicycle. I saw many historic landmarks for the first time, and was pleasantly surprised to find several examples of one of my favorite things: eye-catching historic streetscapes.

It’s certainly not an average small Southern city. I left with over 100 photographs of historic sites along with the feeling that I had seen as much, or more, than I would expect to see on a Southern outing to a larger city such as Rome or Chattanooga. And I knew I would have to go back once I figure out what I missed.

Here’s a quick look at a small sample of what I discovered:

Those three structures are, from top left, the c. 1925 Hamilton house — which is one of the 300-plus houses that make up the East Anniston Residential Historic District; the c. 1885 Anniston Inn Kitchen; and the c. 1888-89 Parker-Reynolds House.

Nicknamed “The Model City,” Anniston was founded in 1872 as the private property of the Woodstock Iron Company. The men who are credited with founding the town, Daniel Tyler and Samuel Noble, ran the settlement alongside the company where they were also the primary stockholders.

In the early years, they used company profits to fund practically every aspect of their model community’s development including the building of churches, schools, parks, paved streets and utilities.

They continued to do so even after their company’s ownership of the town was phased out. Anniston was incorporated in 1879. Company land was first offered for sale in 1883, and the town grew quite rapidly thereafter, much like many other places in post-Civil War Alabama.

A large number of sites in the city are listed with the National Register of Historic Places. Individual listings include 13 commercial buildings, 11 residential structures, six houses of worship, the county courthouse, the train depot, two government buildings, a cemetery, and a monument honoring Samuel Noble, one of the city’s founders.

There are also four military sites at the former army base, Ft. McClellan, listed with the National Register.

Anniston’s main historic commercial strip is found along Noble Street between 9th and 15th Street. Noble runs north to south, and the strip also bleeds over onto the parallel streets, as well as onto some of those that run east to west, especially 10th and 11th.

The courthouse is on 11th, a block west of Noble Street. 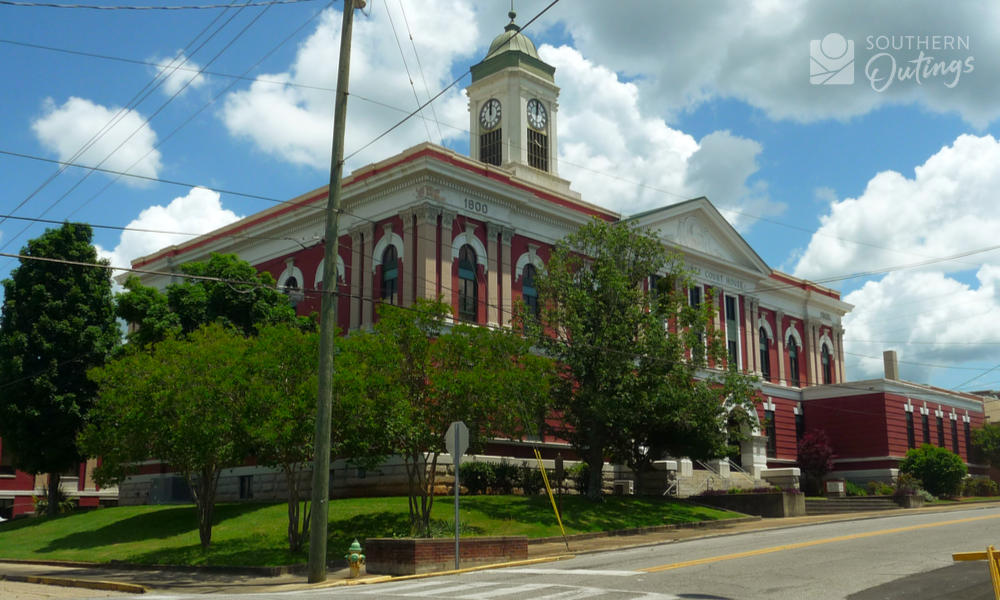 That clock tower was rebuilt in 1931 following a big fire.

Following my May 2020 visit, I now realize that Downtown Anniston features some of the most handsome and interesting 120 to 140 year old commercial buildings in the top half of Alabama. A large number of them have elaborate ornamentation, and many have had very little major modifications since horse and buggy days.

Downtown Anniston Historic District — some of the visual highlights:

In the heart of downtown, the alley named Atlanta Avenue features some fun streetscapes (or alleyscapes, if that’s a word):

About five blocks east of Noble Street on 12th Street, you will find the c. 1885 train depot that was registered with the National Register in 1985 as Union Depot and Freight House.

The depot has been restored relatively recently and it appears to be in use as an office. Adjacent to the depot, the old Ritz Hotel block could be considered a ghost town of sorts.

Nearby, the Anniston Inn Kitchen and main dining hall is up on the hill overlooking the big, beautiful Zinn Park. Currently operated as a privately-owned event center, it’s the only part of the grand Anniston Inn that survived a fire in 1922.

The black and white photo above shows the Anniston Inn as it appeared in the 1910s. The kitchen is on the left end.

A few blocks north of the historic downtown, and at top of a hill right off Quintard, this c. 1888 house was accepted into the National Register of Historic Places in 1985. Since 2015, it has been operated as Hotel Finial.

A large, 3-story hotel building with 61 deluxe rooms has been built at the site with the old house serving as the focal point. If you prefer a more bread and breakfast-like experience, the 132-year-old house’s rooms are available as premium suites. ⇩

See a gallery, take a virtual tour, or book a room at hotelfinial.com.

But knowing that I had only seen, at most, about 55 to 60 percent of the city’s National Register listings, I refilled my water bottles and heading to the streets east of Quintard.

Most of the historic houses in the East Anniston district are 1-story cottages that were built around 90 to 110 years ago. But, there are a good number of fancier, 2-story structures there, and, as usual, those are the ones my camera and I were drawn to.

The National Register application for the East Anniston Residential Historic District refers to one area as “Educational Park where Anniston High School and six houses are located.” Here’s what I saw at Education Park:

I believe some of these old houses that comprise Education Park are currently in use as board of education facilities. The yellow stone structure is currently home of St. Luke Orthodox Church.

Here’s some other highlights from the East Anniston Residential Historic District:

The spectacular Queen Anne-style Noble-McCaa-Butler House (c. 1887) sits on a beautiful, large lot at the southern edge of the district. It was individually listed with the National Register in 1985. 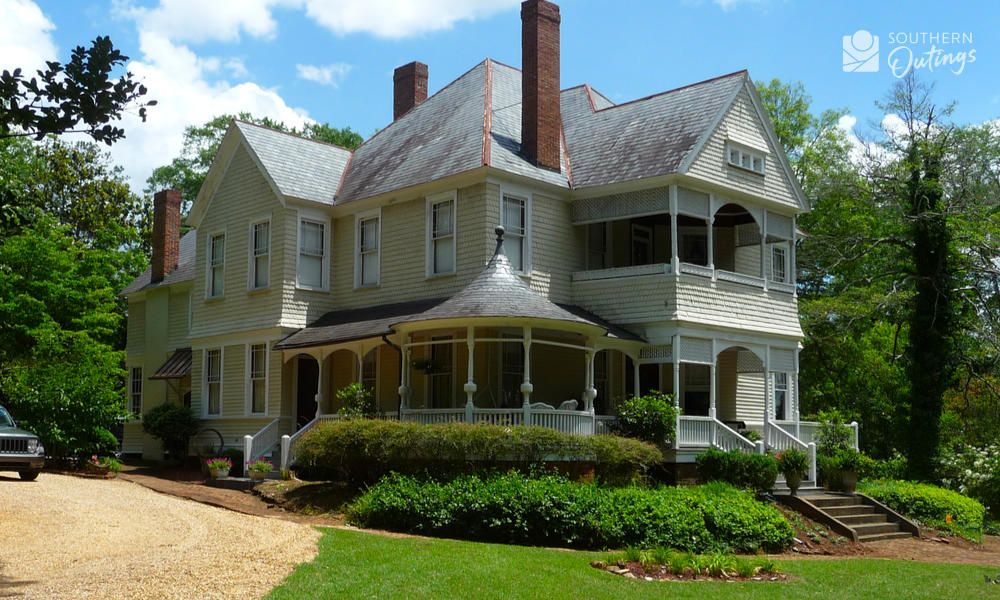 Much smaller than the residential historic district above, the Glenwood Terrace district was listed with the National Register in 1985. The 15 houses that make up the district were all built between 1918 and 1936.

Some of Anniston’s best residential streetscapes are found in the park-like setting of Glenwood Terrace thanks to the landscaped central median, streetlights and beautiful lawns.

After reviewing the National Register application for the Parker-Reynolds house, I knew I had to see it. So I asked Siri to direct me to East 6th Street. There, I enjoyed viewing a large cluster of striking old houses. ⇩

Individually listed in the National Register in 1991, “The Pines” is perhaps the best example of a grand late 19th-century Anniston estate that did not survive until the present day. After being vacant and hopelessly delapidated for decades, it was demolished in 2014. Here’s how the house appeared in the 1991 register application:

Anniston features some notable places of worship, particularly the six that are individually listed in the National Register. I captured snapshots of some of them as I explored the downtown and the residential districts.

Remember — an additional 39 photos can be viewed on my post, Galleries: Additional photos of Anniston historic places.

Anniston is a good road trip, weekend getaway or staycation destination for persons traveling from the Atlanta, Birmingham, Chattanooga and Huntsville areas.

Sources for this article include the Anniston-related applications to the National Register of Historic Places.