Photo galleries on this page feature the following visual highlights of the Bridgeport Historic District:

I was surprised when I realized that I had taken more pictures for this Bridgeport, Alabama gallery page than I did for my Huntsville historic places gallery pages (Part 1 and Part 2). After all, Huntsville has a large number of historic sites and one of the highest concentrations of antebellum structures in the South.

As Alabama’s second largest metropolitan area, Huntsville has 10 museums, one of which is the state’s top tourist attraction.

But Bridgeport is off the beaten path. Nobody says “all roads lead to Bridgeport.” But it hasn’t always been that way. The railroad has come through here for over 165 years. It has been a lot longer than that since a riverboat stop was established here on the Tennessee River.

Bridgeport is a fascinating little city, and after visiting its downtown for the first time since becoming a historic site seeker, I can’t wait to go back to see what I missed.

I had seen pictures of the train depot, and I knew there was a lot of war history. But, until I overlooked the river and railroad bridge from Battery Hill, strolled down Kilpatrick Row or took in Alabama Avenue, I didn’t realize the extent of Bridgeport’s historic appeal.

Any Civil War buff, railroad enthusiast or historic places aficionado would enjoy a visit to this hilly town that’s wedged between the lower tip of the Cumberland Plateau and the river. 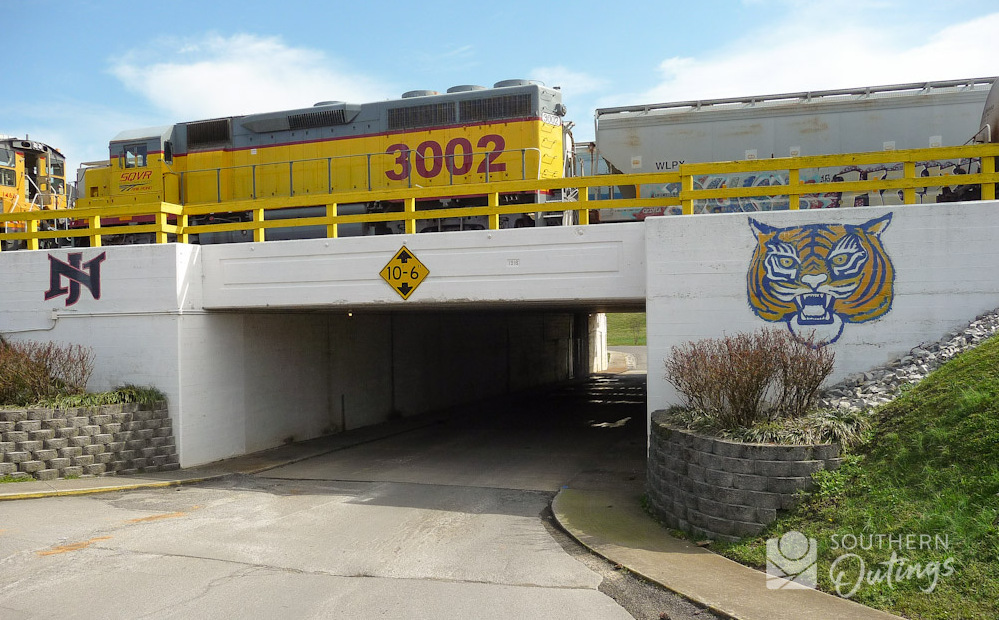 With a population of only about 2,400, Bridgeport is small. But it's big when it comes to connecting with the past. It’s got a nice historic downtown that can be picturesque from some angles. And you can have it all to yourself if you’re timing’s right.

Alabama Avenue is the main street of this old downtown.

A short walk to the east sits the Bridgeport Railroad Museum, which was known as the Nashville, Chattanooga and St. Louis Railroad Depot when it opened in 1917. Outside, it has a caboose and locomotive on display. Inside, the Bridgeport Area Historical Association operates a museum featuring railroad memorabilia and other local historic relics.

The depot is adjacent to Battery Hill which is named for its role in the American Civil War. It’s easy to understand why Confederate and Union forces struggled to control the railroad bridge and this high ground that overlooks the river, town and valley.

Victorian architecture is prevalent on that hill. About 25 years after the war, Bridgeport grew rapidly, and today on Battery Hill, 15 or more 1890s Victorian homes remain from that era. The two-story ones are quite striking.

South of the commercial downtown and parallel to seven lanes of track filled with railroad cars you will find another cluster of Victorian homes on the western end of Kilpatrick Row. There are six c. 1896 Victorian duplexes in a row. According to the Bridgeport Historic District application to the National Register of Historic Places of 2002, these large, unique houses were built for supervisory personnel at local factories.

Eight were built. Six remain. One of them appears to be in peril. There may be only five in the not-too-distant future.

On the eastern end of Kilpatrick Row, you will find the c. 1893 Peyton Building. 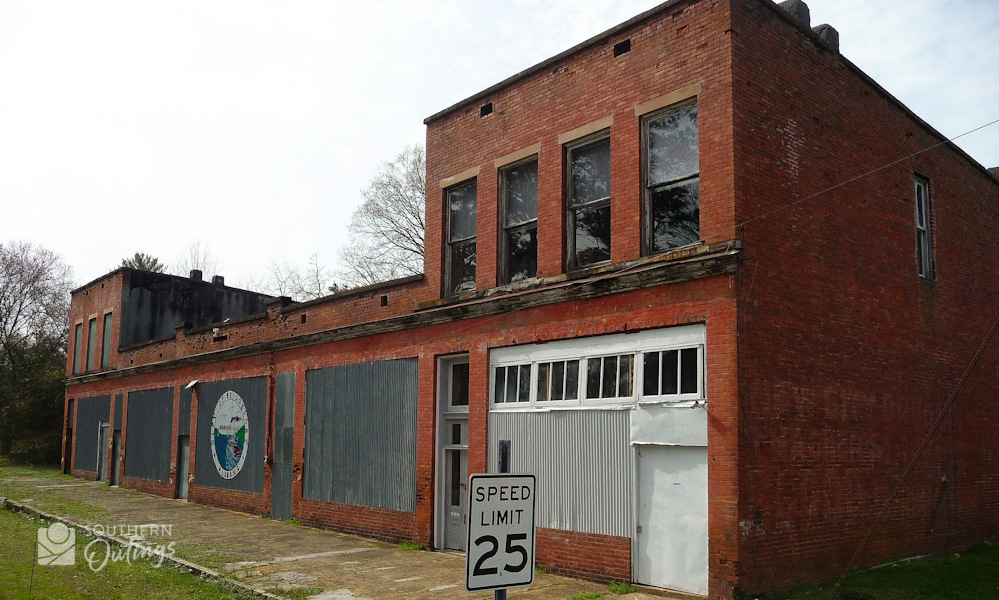 With a few exceptions, I believe I have covered most of the visual historic highlights of Bridgeport. The other houses in the historic district consist mostly of cottages and bungalows from the 1920s-1930s range. The c. 1914 baptist church now appears to be in use as a thrift store or flea market.

On the third Saturday of September, the annual Trail of Tears Commemorative Motorcycle Ride has been starting in Bridgeport for many years. The city now holds a festival downtown to welcome the bikers and to help kickoff their ride.

Speaking of the Trail of Tears, Bridgeport has a 0.72 mile long (one way) greenway that includes a 600-ft. walking bridge across the Tennessee River. The Historic Bridgeport Walking Trail begins on the slope of Battery Hill near the historic railroad depot and ends on the eastern shore of the river.

There is a historic marker at the bridge entrance that explains the area’s Trail of Tears significance and how converting what was left of the c. 1853 rail bridge into a pedestrian walkway was made possible.

The Bridgeport area’s rich Civil War history is commemorated each spring at Alabama’s largest Civil War reenactment. The 2020 Siege at Bridgeport reenactment was cancelled due to the COVID-19 social-distancing efforts. See also https://alabama.travel/upcoming-events/siege-of-bridgeport-reenactment. 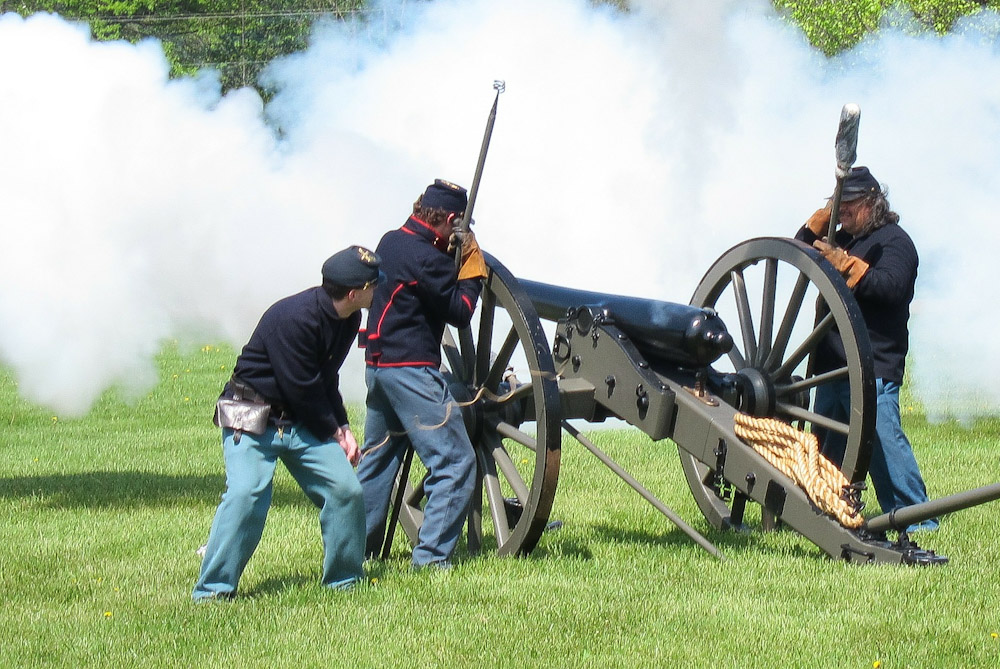 The Bridgeport Historic District application to the National Register of Historic Places provides a fantastic, detailed history of the city.

A less-detailed one can be found here: Encyclopedia of Alabama.

For me, some of the most fascinating Bridgeport-related historic facts pertain to the steamships built there by the Union army during the Civil War, and how those ships helped supply General Sherman’s Atlanta Campaign and March to the Sea.

Any trip to the Bridgeport area should include a visit to Russell Cave National Monument which is eight miles from the historic downtown. 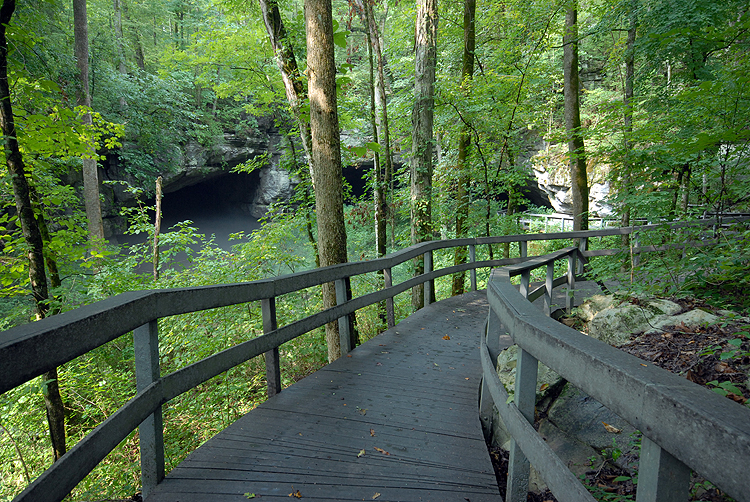 The 310-acre park found at the base of Montague Mountain is a great place to learn about prehistoric native-American cultures. It features a free museum, gift shop, a Junior Ranger Program for kids, a cave boardwalk, ranger-led cave tours when available, a 1.5 mile hiking trail and picnic tables.