The delightful northwest Georgia town of Cave Spring was incorporated way back in 1852. It has 25 entries in the National Register of Historic Places, 23 of which were listing in 1980. That’s a big number for a town with a population of only about 1,200 folks.

Highlights featured in this article are the colorful historic downtown business area, several historic houses that are near to those, and the historic structures in, and adjacent to, Rolater Park.

Of the 25 nationally-registered historic places, 15 of the residential variety were individually listed. A few of those are outside the actual downtown area. This article features only the places that are found within walking distance of the center of town.

The July day of my Cave Spring outing turned out to be one of the hottest days of the year. Luckily, there are more than enough historic-places to see within a half mile radius of the shady park where I started my tour.

The busy U.S. Hwy. 411 and GA Hwy. 100 cross here, so there was a lot of traffic making its way through town. Regardless, it was a great place for wandering around on foot. I had previously seen a few of the historic houses because I sometimes go through the western edge of Cave Spring to get to the Silver Comet Trail in nearby Cedartown.

Even with the traffic, the small town setting is very inviting. Historic cues are strong as you drive past the well-preserved buildings that are mostly between 95 and 130 years old. I found a shaded parking space on Broad Street adjacent to a small park, a red caboose and the Vann Cherokee Cabin, a National Trail of Tears site.

The Cave Spring Historic Commercial District is one of the National Register listings that includes multiple structures.

The historic commercial strip consists of about 14 to 16 buildings, most of which are one-story. All of the buildings appear to be occupied with many of them housing antique or used home decor-type retailers. A couple of interesting restaurants and a fudge shop are also found in some of the older buildings.

Next, let’s take a look at some of the highlights among the historic homes of Cave Spring. Most of them are very near to the historic commercial area. One, the late-1850s John M. Carrol House, is about four blocks to the south. Another, the splendid c. 1869 Wesley O. Conner House is another tenth of a mile further south.

The Cave Spring Residential Historic District includes a good number of other 19th-century and early 20th-century houses along with two churches. There are also some other houses that appear to be from the same era that are just outside that registered district.

Two of the houses in the residential gallery above are individually listed:

FUN FACT: Most small cities in this part of the U.S.A. can trace their 19th-century beginnings to textile mills, iron foundries or other pioneer era industries. Cave Spring’s early development can be linked to a church-owned school that was established in 1838.

Rolater Park is home to several historic places including the town’s namesake spring where water pours from the mouth of a cave. The lovely park is certainly Cave Spring’s most popular tourist destination. It’s actually the only “thing-to-do” attraction in downtown Cave Spring based on the TripAdvisor.com listing for the town (as of Aug. 2, 2020).

Between 1838 and and 1925, Rolater Park was part of the school grounds owned by the Cave Spring Baptist Church.

A stone structure that looks like a small medieval castle serves as entrance to the cave.  A pond that collects the spring water is a popular place to cool off and feed the ducks. I saw people filling up gallon containers with spring water. Apparently, wheelbarrows are provided to help folks transport several containers at a time.

Historic structures near to the pond include the c. 1851 Baptist Church building and the c. 1910 Hearn Academy building that was also owned by the Baptists. Both are currently operated as venues for events such as weddings and reunions.

Another highlight of the tree-filled park — and also originally owned by the Baptists — the c. 1912 Hearn Inn is found within a few hundred feet of the old church building. Originally a dormitory for the Hearn Academy, today it’s operated as an bed and breakfast and is often booked by families who have also booked the church or academy building for a wedding. 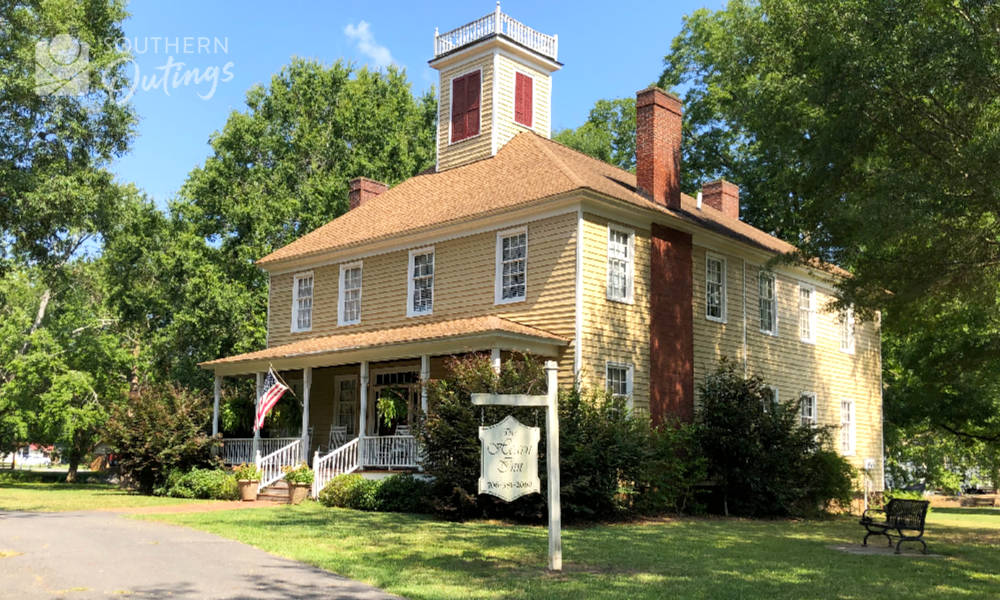 C. 1912 Hearn Inn was originally a dormitory for the Baptist academy

The cave, spring, church, academy and inn are all part if the nationally-registered Rolater Park Historic District.

Georgia School for the Deaf

The Georgia School for the Deaf Historic District contains the five campus buildings on the northeast corner of Cave Spring. The largest, Fannin Hall was built in 1849, but was remodeled and expanded in the 1880s, and remodeled again in the 1920s. Three of the buildings are dormitories, one of which does not contribute to the historical significance of the district because it wasn’t old enough when the district was listed with the National Register in 1980. The other building was built in 1894 as an industrial arts building.

Today, the school is Georgia’s only residential school serving deaf and hard-of-hearing students. It has operated continually since 1848 except for the period from Mar. 1862 until Feb. 1867 when it was used as a civil war hospital.

Whether you want to see the historic sites, visit the creekside park, shop for antiques, or discover new dining options in northwest Georgia, Cave Spring would be a good small town for a weekend getaway, road trip or other type of outing. Due to it’s close proximity to Rome, Cedartown and Rockmart, combining two or three historic downtowns during one trip makes a lot of sense.

See my articles about Rome, Cedartown and Rockmart:

Sources for this article include the related applications to the National Register of Historic Places, and the following: