Centre is the county seat of Cherokee County, Alabama, a county of 553 square miles that borders Georgia. The 47 square mile Weiss Lake sits in the heart of the county with Centre near its southern shore.

Centre is a special place that most people outside of northeast Alabama or northwest Georgia will never consider visiting. That doesn’t mean they don’t have a lot of visitors.

Thanks to Weiss Lake, which is a fishing mecca known regionally as the Crappie Capital of the World, the area entertains a large number of visitors who come to enjoy the great fishing, or other watersports. There are also a good number of lakefront rental cabins and second homes.

So don’t be surprised if the traffic seems to much more than expected in a county of less than 36,000 permanent residents.

The city’s downtown runs about five blocks along Main Street, which is also U.S. Highway 411. From my historic-places enthusiast perspective, it’s neat and clean, engaging and even charming. It has great sidewalks and nice landscaping, and at least a half dozen handsome old buildings that appear to be between 100 and 135 years old.

The c. 1936 county courthouse sits near the middle of the downtown on the north side of Main Street.

Next door to the courthouse, the Cherokee County Historical Museum makes its home  in one of the larger old buildings. If you visit you’ll find displays featuring Native American artifacts, Civil war memorabilia, local newspaper archives, antiques, farm implements and more. Admission is $3 per person. Hours are 9 a.m. to 4 p.m., Tuesday -Friday. 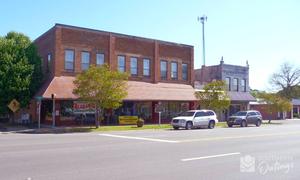 Like many small cities in the region, one of the most appealing old structures in the downtown area is the Methodist Church. It’s santuary appears to be 90 years old, or older.

If you’re downtown, there’s also the c. 1908-10 Savage-Campbell House, a striking old two-story that is presently used as a lawyers office. It can be found almost directly across the street from the church.

Centre has no properties listed with the National Registry of Historic Places, and just a few with the Alabama Register of Landmarks & Heritage. There is only one place in the entire county listed in the National Registry. That would be the Cornwall Furnace which is 10 miles northeast of downtown Centre in the Cedar Bluff area.

The furnace was built with considerable effort by the Confederate States during the Civil War, but it was shut down by the Union Army before it ever produced much of the pig iron for which it was intended. Now it’s a lovely and interesting lakeside park called the Cornwall Furnace Memorial Park.

It’s logical to recommend combining a visit to downtown Centre with a visit to other historic places within about a 45 minute’s radius. Those could include the fantastic historic downtowns of Gadsden, Attalla, Collinsville, Fort Payne, Rome, Piedmont, Jacksonville, Anniston, Cave Spring and Cedartown.