If reminders of yesteryear stir your soul. If you enjoy visiting historic downtowns with well-preserved 100- to 140-year-old buildings that are home to viable boutiques, restaurants, art galleries, museums, etc., then you will love exploring downtown Gadsden.

Gadsden is a midsize city in northeast Alabama sitting at the southern end of Lookout Mountain and on the banks of the Coosa River. It’s downtown features several historic structures that have stood the test of time. Many of them were built between the 1880s and the 1920s.

Broad Street is home to a few dozen of the most interesting buildings, and it — along with another Broad Street in Rome, Georgia — originally sparked my interest in historic downtowns.

A large portion of the area in and around Broad Street was accepted into the National Register of Historic Places in 1997 as the Gadsden Downtown Historic District. There were 126 buildings in that 1997 listing, 76 of which contributed to it being recognized as historic. The district’s construction date range is 1878 to 1948, and 14 city blocks have at least one building in the recognized area.

FUN FACT: The first J.C. Penney department store east of the Mississippi opened in 1923 at 301 Broad Street in Gadsden.

As is typical in America, it seems that the older the building, the more elaborate the exterior architectural decorations. And there certainly are some interesting brickwork, window arches and hoods, and entry bays to be seen in Gadsden. 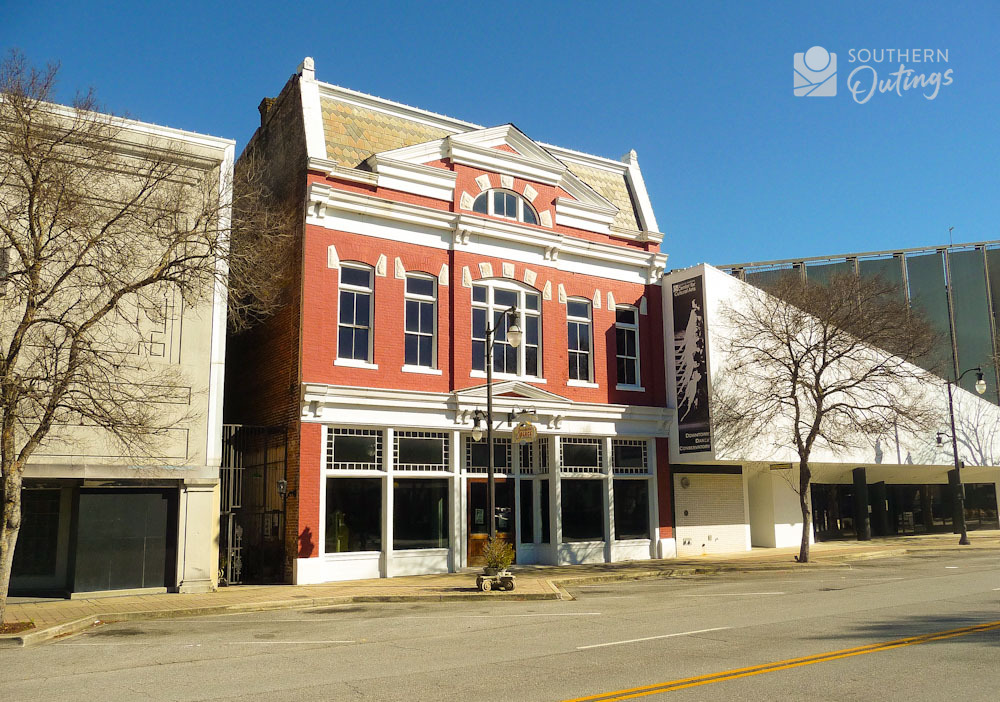 The red S.A. Berger Dry Goods/Kyle Building (c. 1883) at 511 Broad Street is one of the most distinct buildings in the district, and is currently home for the Imagination Place, a museum for children operated by the Center for Cultural Arts. The ground level exterior was reconstructed in the late 1990s to a likeness of its original appearance.

The three buildings in the middle of the north side of the 300 block are among my favorites.

The handsome red Weiss Building (c. 1890, 315 Broad) is currently occupied by First Equity Home Loan. The red brick building to its immediate right (313 Broad) was built in century-old style, but in 1996 to fill in an empty space! The Dawson Building (c. 1884) at 309 Broad got a new elegant terra cotta face in 1924 when it became the Pizitz Department Store.

The north side of the 400 block includes some of the most visually-appealing structural trim work to be found on Broad. The Frank & Hagedorn Building (c. 1913) has some intricate stone and tile. The ground level may have been recreated or remodeled to some degree. The fancy ornamentation wraps around both sides to take advantage of the fact that it sits at the historically significant corner of Court and Broadway.

Also found is the large Maragne Building that’s presently home to Gadsden Vineyard Church. Based on the address of 417-419 Broad Street, it appears to be what was once known as the Ewing Building, c. 1885.

From 429 to the Delaney Building (c. 1890) at 433-435, the large buildings have beautifully-painted details with matching hues of pale green and tan above their dark red entry ways.

One of the few standalong buildings on Broad Street is the c. 1910 U.S. Post Office that later served as a federal courthouse. It features Georgia marble which, along with its red roof, help it stand out at the corner of 6th Street. It’s presently a privately-owned professional office building. 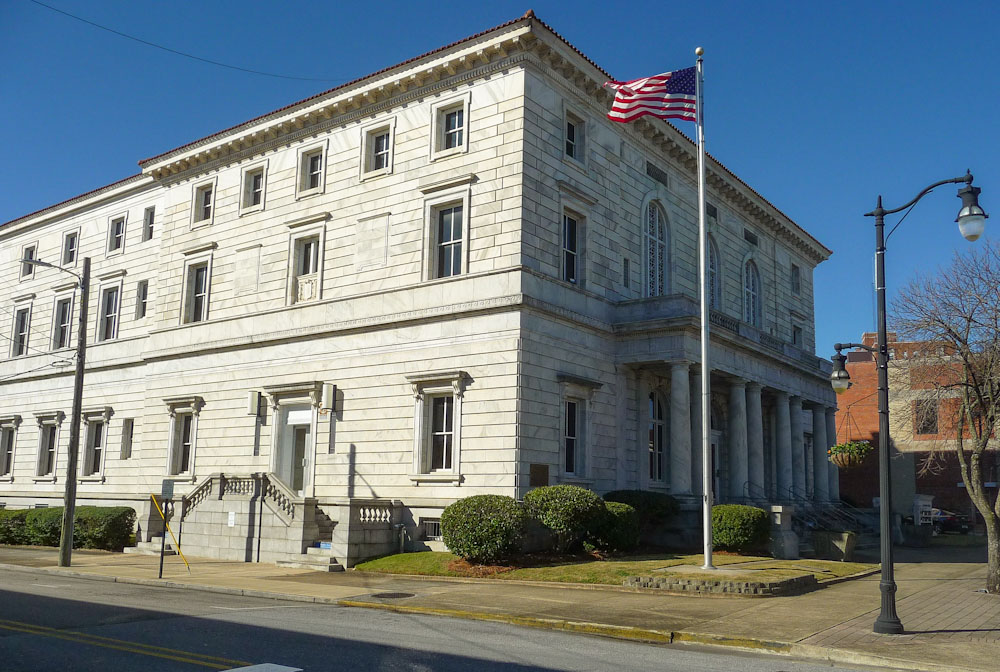 A dining destination of sorts has developed over the past few years back over at the 500 block. Seven or more small restaurants including an Italian restaurant, a sushi restaurant, a steakhouse, a burger bar and a coffee shop now occupy some of the smaller buildings found there (as of Jan. 2020). Jefferson’s, a popular regional restaurant chain, has a location there, as well.

Speaking of restaurants, just a block off of Broad on Court Street, the lower floor of the c. 1905 three-story, red-brick warehouse is home to Harp & Clover, a popular Irish pub and restaurant.

Perhaps the most popular pizza place in the northeast Alabama region is also near. Mater’s Pizza is located at 329 Locust Street.

Before the old 1890 Etowah County Courthouse was razed in 1948, Court and Locust were part of Gadsden’s old courthouse square.

Mater’s faces what is left of the grand Printup Hotel on the old courthouse square’s east side. The hotel burned at the beginning of the Great Depression, and only its carriage porch remains today at the site of a beautiful 1980s-era office building.

Shown, from top left: The c. 1905 Court Street warehouse now has a popular Irish pub/restaurant in the ground floor, the carriage porch is all that remains of the c. 1888 Printup Hotel and an early 1940s Gadsden scene before the old courthouse was demolished. 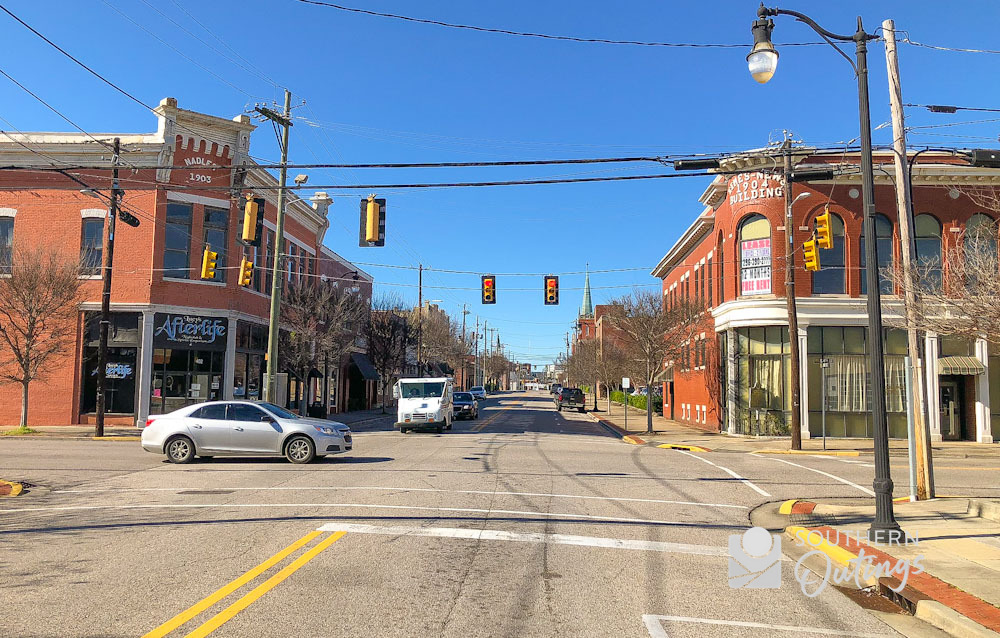 One block south of Broadway, Chestnut Street has several historic buildings that haven’t changed a great deal in the 115-plus years since they were constructed. The red-brick Nadler Building (c. 1902) and the Times-News Building (c. 1904) sit on the corners of Chestnut and South 4th like a gateway to a mile-long stretch of historic sites.

At the corner of Chestnut and 5th, you’ll see the First United Methodist Church, which was originally built in 1893. The Victorian Gothic structure, shown on the left, with the massive steeple was renovated in 1955.

I recommend going west on Chestnut at least as far as South 9th Street where you’ll find a cluster of historic buildings. The Gunn-Bellenger House (c. 1886 Victorian-style) and the Colonel O.R. Hood house (c. 1904 classic revival) are there.

Also, the remarkable Episcopal Church of the Holy Comforter (c. 1921) is across the street from those two houses. Other interesting buildings are found in the area between Chestnut and the present Day county courthouse.

There are several other houses within a few blocks of those that appear to be from the 1890 to 1920 time range, particularly on 8th, 9th, 10th and Walnut Street. Further west, the Eleventh Street School (c. 1907), which is currently being used as an office by the city school system, is on the corner of Chestnut and 11th.

Other historic places in Gadsden area

There are some other significant places you may want to visit if you are a history, Americana or nostalgia enthusiast like me.

First, the stone Gadsden Amphitheater, c. 1935, was added to the National Register of Historic Places in 1988. It has been known through the years by different names including Mort Glosser Amphitheater and the Legion Park Bowl.

Second, there’s a c. 1777 pioneer homestead inside Noccalula Falls Park. And, if you haven’t seen it before, your next visit to Gadsden should include a stop at the 90-foot waterfall where you can learn the legend of the young Cherokee lady who the waterfall is named after.

Third, there are several houses of worship in and around the downtown area that appear to be from 1890s to 1920s, more than you would expect for a city of this size. There’s also an eye-catching synagogue.

Finally, there is another historic downtown district within the Gadsden city limits, and another in a small, bordering city. See my articles about them:

See also, Where to enjoy some waterside fun on your next trip to Gadsden.

Gadsden is an excellent road trip, weekend getaway or staycation destination for persons traveling from the Atlanta, Birmingham, Chattanooga and Huntsville areas. Furthermore, it would be easy to recommend the city for a full vacation when you consider all the things there are to do and enjoy including fishing, boating, the riverside parks, Noccalula Falls, the historic sites, the museums, golf courses and more.

Getting to the Gadsden Downtown Historic District

My research sources for this article include some historical markers and the following:
The Gadsden Downtown Historic District application to the National Register of Historic Places found at www.nps.gov/subjects/nationalregister
The Etowah County Tourism Board site at greatergadsden.com