Located just 30 miles north of the Birmingham metropolitan area, these three historic covered bridges will hook you with their natural setting and nostalgic charm.

North Alabama is blessed with so many opportunities for nature-based fun featuring places like waterfalls, rivers and creeks, mountains, forests and historic places — to name a few.

Of course, historic covered bridges are naturally nostalgic — a great reminder of what life was like for our grandparents and great grandparents. They are pretty rare nowadays. Only a few remain, and central Blount County is home of three that are relatively near to each other and easy to get to from Birmingham, Gadsden and Huntsville.

The three remaining covered bridges of Blount County were built between 1927 and 1934 and come in three sizes:

My visit in the summer of 2020 was the first time I had seen the bridges in many years. I had many questions running through my mind. In what condition will I find them? Will I be able to drive or walk across? Will I be brave enough? Could I get to the creeks at each one to take pictures from below?

At each bridge, I ended up driving my Chevy across to the other side and back again with no problem. Currently, they are each very sturdy. You can’t see much from your vehicle due to the lattice work and metal siding, so anyone suffering from mild acrophobia should have nothing to fear.

The Swann Covered Bridge and the Locust Fork of the Black Warrior River that it spans make a fine destination on their own. At over 300 feet long, the bridge is the longest of the three, and, as you can see below, the photo-taking opportunities are bountiful as the rocky river bed is both easily accessible and surrounded by woods.

If you only have time to visit one of the bridges, the epic Swann bridge, which was listed with the National Register of Historic Places in 1981 should be your first choice.

Original construction: Built in 1933 as a three-span Town-truss, lattice-style one-lane bridge with local pine and oak wood set on concrete piers and abutments. The lattice-style planks form a webbing that looks stylish and adds strength at the same time.

Location: 1590 Swann Covered Bridge Road about 1.8 miles west of the historic center of Cleveland, Alabama, and 11.2 miles from the heart of Oneonta at Alabama Hwy. 75.

Drivable? The one-lane Swann Covered Bridge will accommodate passenger vehicles under 3 tons as long as they are less than 8 feet in height and not over 9 feet in width.

Parking: Parking is available only on the edge of the road. It’s easier to park on the north side of the bridge. That means if you are coming from Cleveland, you should drive across and park on the gravel on the right side of the road. You will need to be able to walk on a slope with a grade of about 5 to 7 percent.

Summary: Alabama’s longest historic covered bridge, the Swann Covered Bridge is found in a wild river setting that has the look and feel of a state park. The river features shallow waters with a gentle current a large percentage of the time, but can have higher water and stronger currents when heavy rains have occurred. The site is a popular swimming hole and hikers will find it relatively easy to walk along the edge of the river in either direction. In addition, this section of the Locust Fork is pretty popular among whitewater enthusiasts. Nearby rapids are in the class II and III range, and the scenery along the river is great.

Next, the Horton Mill Covered Bridge is the easiest to get to among the three bridges. It’s just about 100 feet from Alabama Hwy. 75 and only 2.9 miles from the Oneonta Walmart Supercenter. Listed with the National Register of Historic Places in 1970, it’s the highest covered bridge in the United States.

Amazingly, it’s 70 feet between its deck and the creek below. It spans the Calvert Prong of the Little Warrior River from one vertical rock cliff to the other.

FUN FACT: At the time that the Horton Mill Bridge was nominated for the National Register in 1970, a cable was tied to a large oak tree to prevent the bridge from tilting over. Of course, all three covered bridges of Blount County are well maintained at the present time, and are as good as new.

Construction: Built in 1934, it is a two-span Town truss style bridge with wood boards and planks set on concrete abutments. The lattice-stye planks form a webbing. It was built to replace an older bridge that was once found about 0.75 of a mile downstream.

Current owner: The state of Alabama

Drivable? The one-lane Horton Mill Covered Bridge will accommodate passenger vehicles under 3 tons as long as they are less than 8 feet in height and not over 10.5 feet in width. A sign on at its entrance warns: “caution, only one vehicle at a time.”

Parking: There is a gravel parking area just north of bridge on Hwy. 75. You’ll see a path with some steps and a handrail. You will need to be able to walk on a slope with a grade of about 5 to 6 percent.

Summary: Due to the dense woods and the vertical cliffs, you can’t walk down to the water at the Horton Mill Covered Bridge like you can at the other two covered bridges. At times, Hwy. 75 has a great deal of high-speed traffic just a few feet away from the parking area. Horton Mill Covered Bridge was closed to vehicles between 2007 and 2013, but has been well maintained by state and county agencies since that time.

The Easley Covered Bridge provides dry passage across a narrow section of the Dub Branch which flows into the Calvert Prong of the Little Warrior River a few hundred yards to the north. It’s not nearly as high above the water as the Horton Mill Covered Bridge. Listed with the National Register of Historic Places in 1981, the Easley Covered Bridge is only 3.6 miles from the heart of Oneonta.

Total length: 95 feet
Height above water: 18 feet
Construction: Traditionally believed to have been built in 1927, it’s a Town truss style bridge constructed from pine and oak wood. The single span rests on rubble masonry abutments. Its sides consist of lattice-stye planks that form a webbing covered partially by metal siding.
Current owner: Blount County
Location: It’s only 3.6 miles from the intersection of U.S. Hwy. 231 and Alabama Hwy. 75 in downtown Oneonta. It can be reached from Hwy. 231 or County Road 33.
Drivable? The one-lane Easley Covered Bridge will accommodate passenger vehicles under 3 tons as long as they are less than 8 feet in height and not over 9 feet in width.
Parking: You may park on the wide gravel edge of the road on either side of the bridge, but the gravel area on the east side is much wider and can accommodate five or six vehicles. A covered information station is also on the east side.
Summary: The Easley Covered Bridge the smallest and lowest of the Blount County covered bridges. It seems even smaller than it’s 95-feet length and 18-feet height dimension would indicate, especially if you visit it after seeing the larger Horton Mill or Swann Covered Bridge. It’s easy to park, and access to the branch is relatively easy. You can walk on the big rocks in the branch to get a view of the bridge from different angles.

Getting to the Blount County covered bridges

Other things to do in the Blount County and Oneonta area

If you are a historic places enthusiast, you will want to see 1st and 2nd Street in downtown Oneonta. See my article, I didn’t know what I was missing in Oneonta for three dozen photos from my recent visit.

If you are spending the entire day in the area, the county-operated Palisades Park is a 145-acre park on the bluff atop Ebell Mountain. It’s just 5.1 mile north of the intersection of U.S. Hwy. 231 and Alabama Hwy. 75 in the heart of downtown Oneonta. Or, if you’re following the Google map link above, take a side trip to it while you’re making your way from the Horton Mill Covered Bridge and the Easley Covered Bridge.

Palisades Park features about two miles of hiking trails, beautiful bluff views, meeting facilities, a fire tower, and a restored homestead that consists of two cabins, a school house, a log barn and a chapel. Rock climbing and rappelling are allowed, but by permit only. 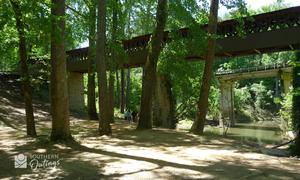 More information about the Clarkson Covered Bridge can be found on my Exploring Cullman post.

In neighboring St. Clair County, Horse Pens 40 is a 40-acre nature park with massive rock formations. It’s know regionally as a bluegrass music venue where several events are held each year in a place there where the rocks and slope form a natural amphitheater.

Horse Pens 40 is 14 miles east of downtown Oneonta on the western edge of Chandler Mountain which is also known for its tomato farms. In addition, Smith Tomato Farm is very near to Horse Pens 40. You can pick your own tomatoes and other vegetables in the summer and fall. See Smith Tomato on Facebook.

Sources for this article include the following: