Over 210 years ago, Huntsville became the first incorporated town in the Alabama Territory, and a few of the structures featured below are almost that old. Many others are between 120- and 200-years old.

If you live in the deep south but can’t make it to Savannah, Charleston, New Orleans or St. Augustine to enjoy the spectacular historic places found in those cities as often as you would like, Huntsville may be the next best thing.

Nicknamed the Rocket City, Huntsville is known for it’s role in the NASA space program, the Redstone Arsenal army base and the large number of high-tech research and manufacturing facilities. A majority of outsiders aren’t aware of this old city’s fascinating history and incredible collection of historic places.

I have lived in the northern half of Alabama for over 55 years and I was surprised to discover the large number of Huntsville sites listed on the National Register of Historic Places, and how plentiful historic marks are in the downtown area.

Places that are individually listed in the National Register include over four dozen buildings and houses, four churches, the train depot, one school, one gas station, one cemetery and the big spring that enticed the first white settlers to put down roots in the downtown area in the first place.

It would take over a week to properly visit all of the places that I would recommend, but few visitors would want to spend that kind of time. So here I attempt to provide a visual guide to some of the places that perhaps a first-time visitor would enjoy seeing on a long Sunday afternoon.

Thus, this Part-1 article and its photo galleries provide a look at a narrowed-down list of sites including the c. 1860 railroad depot, the public square and the Alabama Constitution Hall Park.

Let’s start at the depot.

It’s the oldest surviving railway terminal in Alabama and was built to serve as the headquarters for the eastern division of the Memphis and Charleston Railroad. A freight depot, an engine house, a machine shop, and two car shops were built between 1856 and 1859. The three-story headquarters and passenger station was completed in 1860.

The depot has some intriguing Civil War history. In 1862, Union troops successfully took control of the city with the primary goal of capturing the depot and shutting down the critical railway route.

Now, the depot is one of three properties operated by the city’s EarlyWorks Family of Museums. It’s 0.4 mile from the public square.

The public square is a great destination on it’s own

I like to enjoy Huntsville’s historic sites from the sidewalk, and I started at the public square on the days I captured the photos found below. Some of the buildings found in the square are listed individually in the Register. The square has a wonderful setting, and parking is easy on weekends, especially on Sunday.

There have been ongoing efforts to make the heart of Huntsville’s downtown an outstanding destination for both locals and tourists, and what has been achieved in the past two decades is impressive.

I love the public square because of the many historic sites, museums and the beautiful park with a lake that are all within walking distance — or better yet, all within easy biking distance. But, it would be a great place to visit even if it was all there was to see downtown.

Fifteen connected buildings sitting on the public square’s southeast side were listed as a unit with the National Register in 1980. They have the street addresses of 104 to 128 South Side Square.

Although they have been remodeled once or twice during the past 150 years or so, the buildings at 108 and 110 South Side Square date back to 1835-40. Most the others were totally rebuilt between 1883 and 1917 although the old foundations remain underneath a good number of them.

Today, it’s a colorful block with the Constitution Hall Park at its rear. Most of the storefronts are currently occupied by law firms.

But the block also contains Harrison Brothers Hardware which is operated by the Historic Huntsville Foundation. This place is worth a trip to the public square all on its own.

According to its website, the store retains its original 1897 appearance. All the original counters, display shelves, wood floors and fixtures remain intact. Sales are even rung up on a 1907 National Cash Register.

On the opposite side of the courthouse, you will find the North Side Square Italianates which are a couple of buildings that were each accepted individually into the National Register in 1980.

Over on West Side Square you’ll find the upper entrance to the amazing Big Spring Park, and the incredible c. 1835 Greek Revival building that was registered nationally as a historic place in 1974 as the First National Bank.

There’s a lot of history surrounding that big spring, and that old bank and the land it sits on. In 1805, John Hunt — the man Huntsville is named after — built a log cabin at or near where the bank building sits. 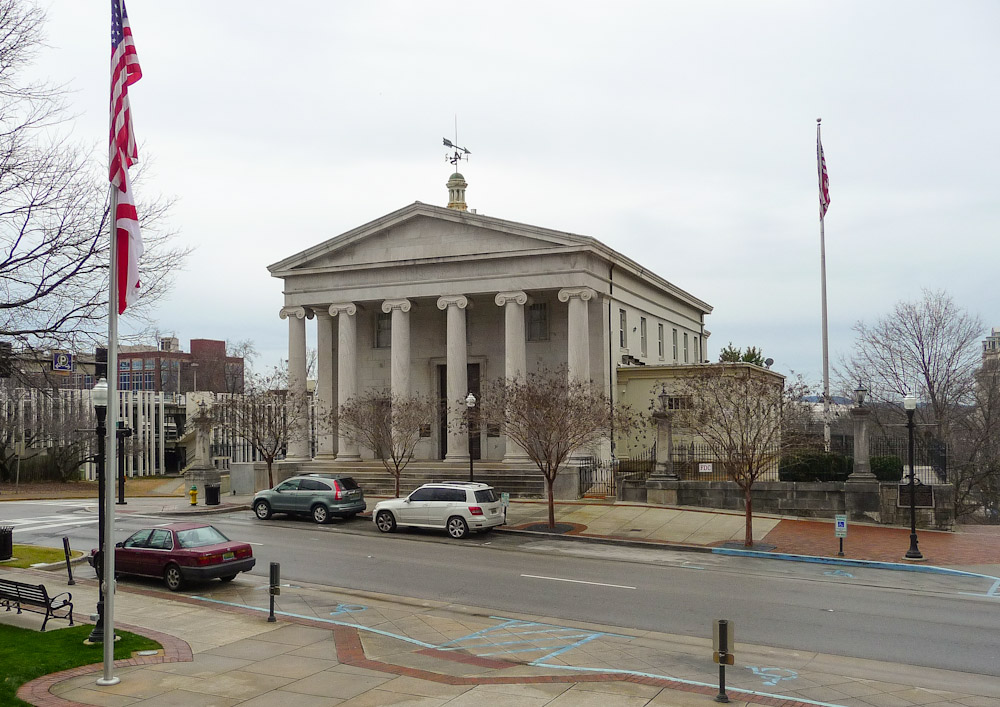 A square must have four sides, and I find the setting of the fourth side of the public square simply irresistible. East Side Square contains three amazing buildings that are each listed individually on the National Register of Historic Places. They include:

The Milligan Block sits handsomely at the corner of Randolph Avenue. Next door, the May and Cooney building stands out with it's three stories, glazed terra cotta facing and amazing bottom-floor windows.

When you look at the eye-catching Schiffman Building, which sits at the opposite corner of East Side Square, you see the result of an 1895 Romanesque Revival style remodeling project. Only one-third remains of what was —  before the extensive update —  a large c. 1835-61 three-story, three-bay brick building. The other two bays were torn down in the early 1970s.

Like streetscapes? Check out my article: Summertime in beautiful historic downtown Huntsville.

Only 160 feet from the Eustic Avenue corner of the public square, the buildings in the Alabama Constitution Hall Park are not actually the 200-year-old buildings that they appear to be. But, they do represent what is a remarkable replica of what the village probably looked like when the state constitution was prepared there after the U.S. Congress approved Alabama’s statehood.

In the early 1980s, the city built a reproduction of the buildings in and around the spot where Alabama’s 1819 constitutional convention took place.

There are 16 buildings in the park complex. The replica of the cabinet maker’s shop where the constitution was signed is perhaps the most interesting one. The likenesses of the Boardman Building and the Sheriff Neal residence are quite interesting as well.

The park and museum underwent major improvements leading up to events related to the Alabama bicentennial celebration of 2019.

Why not stay in a hotel that’s within walking distance of the sights shown on this page?

A nice variety of lodging options are found near the city’s center. If you plan to stay overnight, or for an entire weekend, you’ll be within walking or biking distance of most of the sites featured in this article when you book a room at one of the properties that are adjacent the Big Spring Park lake. Those are:

Alternately, a 10-year old Springhill Suites and a 7-year old Homewood Suites by Hilton are each within a half mile of the lake. Other new hotels, including a unique new Hampton Inn, are currently under construction, and more are planned as the city increases its number of available rooms for convention purposes.

Across the street from the Constitution Hall Park & Museum, at the corner of Madison Streets and Gates Avenue, you will find the large, striking c. 1899-1900 Hundley House which was registered individually with the National Register in 1978. It’s presently used as a law firm’s office.

Next door are two houses that were also registered nationally in 1978 as the Hundley Rental Houses.

If you would like to learn more about the historical places in Huntsville, follow some of these links to get started:

My research sources for this article include some historical markers and the following:

The various applications of Huntsville sites to the National Register of Historic Places found at www.nps.gov/subjects/nationalregister