As I said in Huntsville historic places: Part 1, Huntsville is one of the few cities in the deep South that I consider the next best thing to Savannah, Charleston, New Orleans or St. Augustine for a historic-places-based trip.

The Twickenham Historic District’s visual appeal is one of the top reasons a historic sightseeing trip to the city is a great Southern outing.

Downtown Huntsville has one of the highest concentrations of top-notch historic landmarks in the South, many of which are from the first half of the 19th century, and — for many historic-places seekers — Twickenham is the best of the best in the city.

According to the district’s 1972 National Register application, the district’s boundaries “were defined in such a way as to encompass a living architectural museum of structures ...”

Before Huntsville was officially named Huntsville, Leroy Pope led efforts to name it Twickenham after the suburb of the same name in London where his renowned relative — 18th-century poet Alexander Pope — resided. Prior to that, the community had been called Hunt’s Spring. The first settler, John Hunt, built a cabin there in 1805.

In 1809, the Mississippi Territory House of Representatives passed legislation that allowed for the platting of the town, along with authorization to build some government buildings and auction the land. The legislative act included the name Twickenham. But in 1811, the rapidly growing town was incorporated as Huntsville as a majority preferred naming it in honor of Hunt. It was the first incorporated town in the Alabama Territory.

Pope purchased a large portion of the land in the new town and built a mansion at the top of what is now known as Echols Hill.

The district’s 2015 update and boundary increase application to the National Register of Historic Places provides an incredibly-detailed description.

Once you’re in downtown Huntsville, you can get to Twickenham, from any direction and from several streets, but I like to start at the southeast corner of the public square.

At that corner you will find the three-story now labeled as the David L. Thomas Building. It was built in 1836 but has been remodeled two or three times. It’s a good reference point whether on foot, on bike or in a car. That’s because almost 90% of the district is found within the right angle this corner forms with Eustis Avenue and Franklin Street. 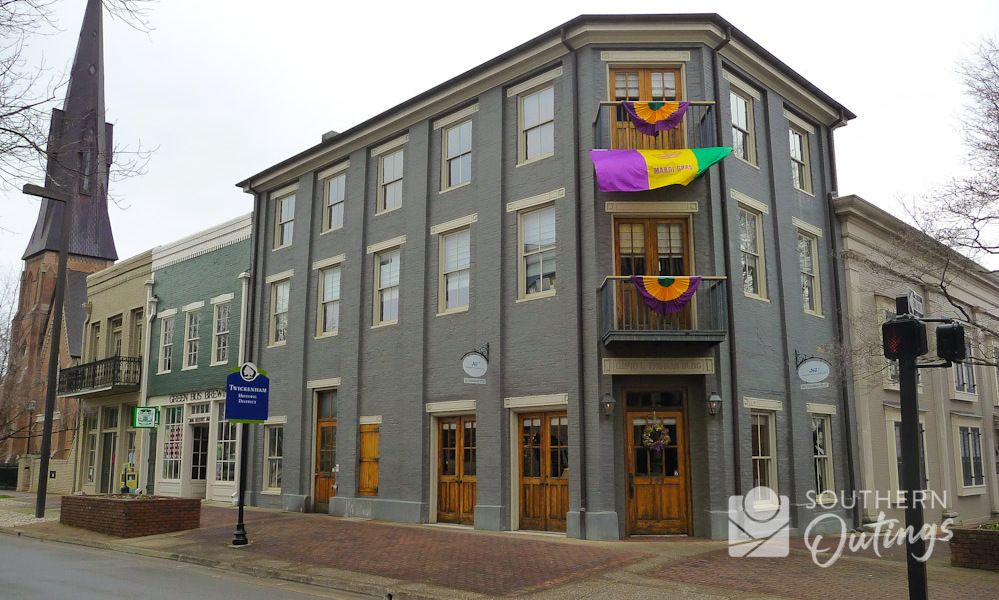 Walk, ride or drive into the district and you’ll discover an area of about 12-blocks filled with alluring streetscapes, and fascinating history. While there are a few museums, churches, businesses and other buildings in and on the edge of the district, most the places contributing to Twickenham’s historical significance are private homes.

Personally, the large number of well-preserved houses that are between the ages of 170 and 205 years old are what fascinates me the most. A variety ranging from small two-room, two-story frame houses with small yards to gated estates with yards of 15-acres or larger can be easily viewed from the sidewalk.

Almost every house and yard are very well-kept. Landscaping is professionally done throughout, and there are some jaw-dropping private gardens.

Above: The c. 1825 Yeatman House; birthplace of Brigadier Gen. John Greenway and the Walker-Lowe House; also known as Westlawn (1834).

You could pick almost any street in Twickenham and enjoy a sidewalk tour that you would not soon forget whether you visited the rest of the district or not.

Franklin Street is one of those streets.

Here’s a few of the Franklin Street properties:

Franklin Street may be the flattest part of Twickenham. On it’s east/northeast side, Echols Hill provides an elevation rise of up to 80 feet. The hill enhances the views in several spots, but it can make a walking or biking tour more challenging.

These two fine 19th-century homes sit side-by-side on the slope of Echols Hill on Adams Street:

At the corner of Gates Avenue and Green Street, the c. 1819 Weeden House is open to the public as a museum for very specific hours, or by appointment. It’s also a wedding venue. The guided tours mentioned at the end of this article include it. 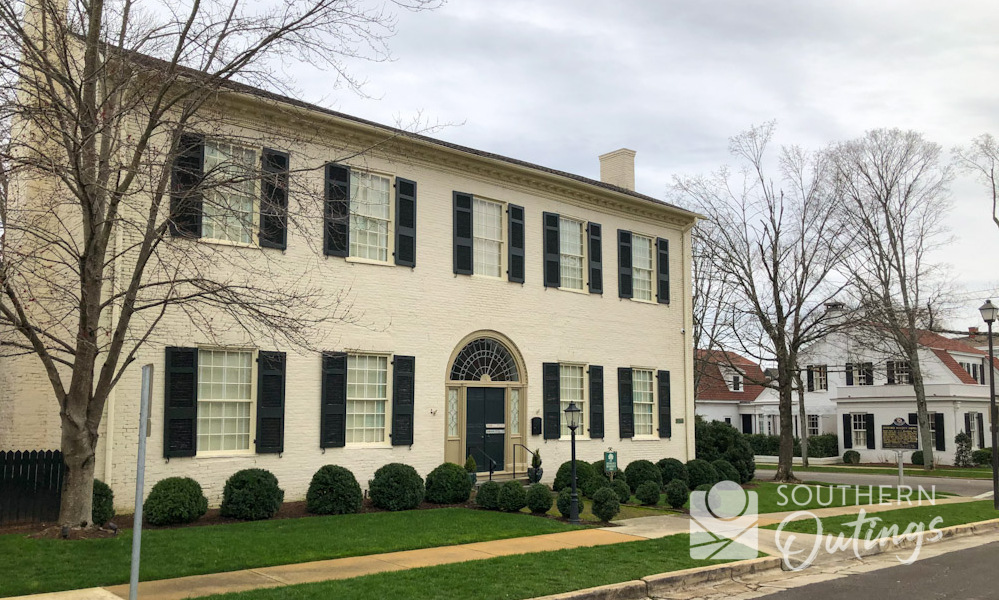 Three historic churches are within the district:

Another historic church, the c. 1884 Randolph Street Church of Christ, is just a few feet outside of the official Twickenham Historic District boundary across from the Methodist Church.

Williams Avenue is another street in the district that could stand alone as a great sidewalk tour. The c. 1836 Thomas Bibb House is found there. 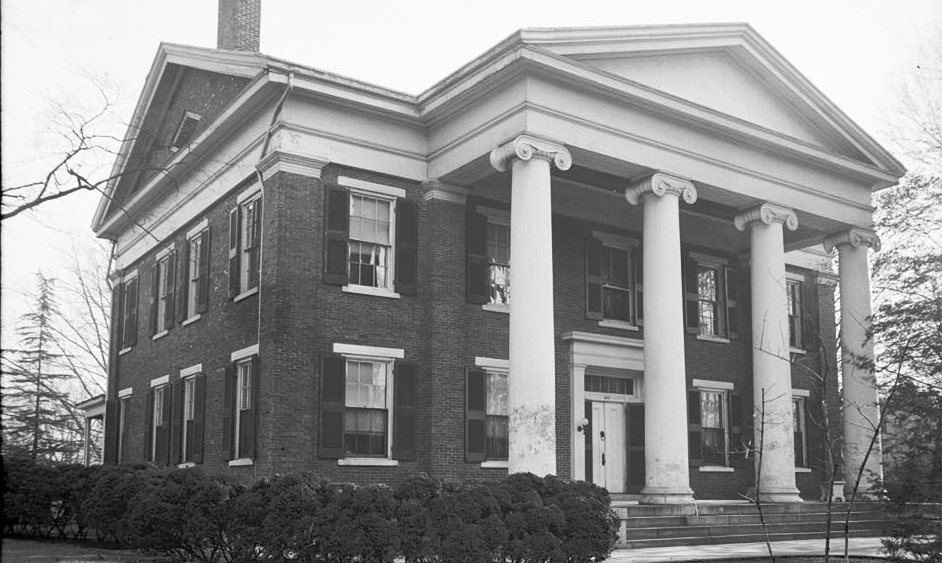 FUN FACT: Thomas Bibb was Alabama’s second governor. His brother, William Wyatt Bibb, was the first. Less than a year after being elected governor in 1819, William died in a tragic horse accident. Thomas was the president of the Alabama Senate and became acting governor. He completed his brother’s term but did not seek reelection in 1821.

I plan to add more photos of the amazing Twickenham district to this page when possible. For now, I’ll conclude with a small gallery featuring just a few other houses:

If you can’t get to the guided tours you can enjoy the self-guided Huntsville History Tour walking digital tour anytime. It features 40 stops with audio. The tour route includes a large portion of Twickenham along with some other nearby sites.

The Huntsville Ghost Tour, hosted by Avalon Tours in September and October, offers a spooky, night-time look at a few of the possibly-haunted places in Twickenham.

The color photos on this page are the intellectual property of T.R. Eberhart. The black and white photos were found on the Library of Congress website, www.loc.gov, and are believed to be public domain.

Sources for this article include the following: