Jacksonville is best known as home to Jacksonville State, Alabama’s sixth largest university. The rolling hills at the foot of Choccolocco Mountain help provide a nice setting for the city and the university campus.

JSU’s main administrative building, Bibb Graves Hall, is the most visually-appealing place on the lovely campus. Most the other older buildings have similar architecture.

Personally, Jacksonville is the place where I most often access the Chief Ladiga Trail for epic bicycle rides.

The city itself is older than most small cities in the region. It has some historic structures that are older than what you find elsewhere. That’s largely due to the fact that the Union Army didn’t burn them during the Civil War. The result is a good collection of houses, churches and commercial buildings that are a few decades older than what you typically find in the northern half of Alabama.

Places listed with the National Register include two districts and six individual structures. Visual highlights include the two-story downtown commercial buildings along with antebellum houses, churches and a grain mill.

Construction on the First Presbyterian Church starting in 1859. It got a new spire on top in 1912. Other than that, it apparently appears the same as it did 155 years ago. 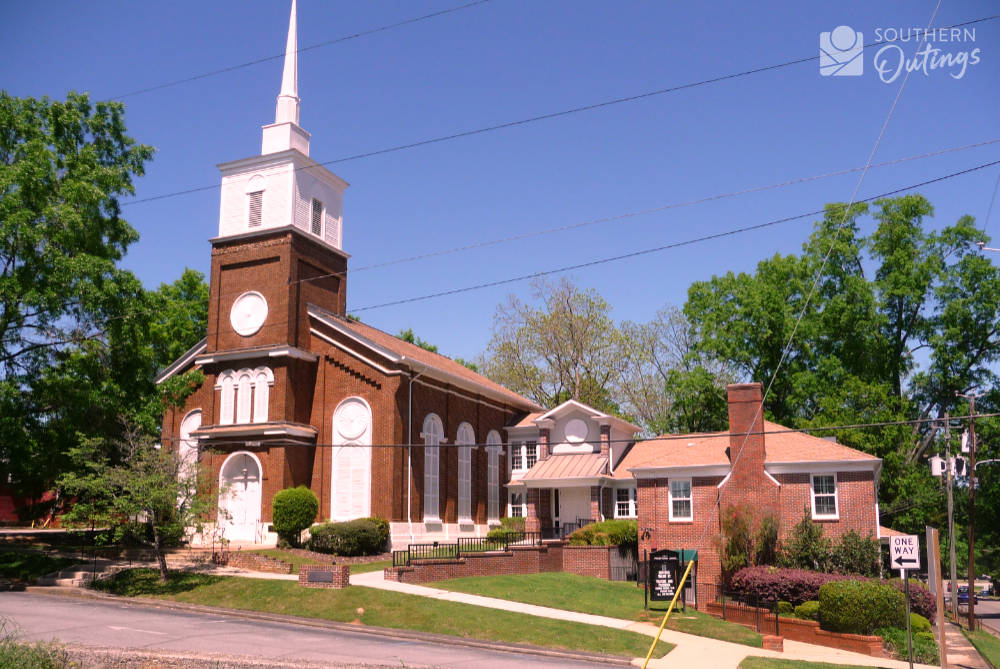 The old part of the First Presbyterian Church is on left

Another amazing church is one block to the south. The Saint Luke’s Episcopal Church was completed in 1856. It’s Gothic-style architecture complete with a bell tower and lancet windows and doors make it one of the top historic sites to see.

The two churches are within walking distance of the downtown commercial area, just two blocks to the east.

At the commercial area, what was a courthouse square back in the 1800s is now a busy oval-shaped roundabout with a nice green space in the center. Between 1833 and 1895, Jacksonville was the county seat and a courthouse stood where the green space is now.

The Downtown Jacksonville Historic District was accepted into the National Register of Historic Places in 1986.

Visually, the white columns of the Greek-revival style Regions bank at the northwest corner of the square will certainly draw your gaze. What you see is the result of the complete remodel in 1977 to the old building that was originally built in 1902.

On the northeast corner of the square, you’ll find what I believe is the oldest building in a north Alabama downtown, outside of Huntsville. It’s the c. 1838 brick tavern building that is now painted tan. It has some wood siding and awnings on the lower level, but other than that, the original part very likely looks very much as it did 182 years ago. It and the c. 1868 Craven Building to it’s right survived a fire that destroyed the rest of the block in 1883. 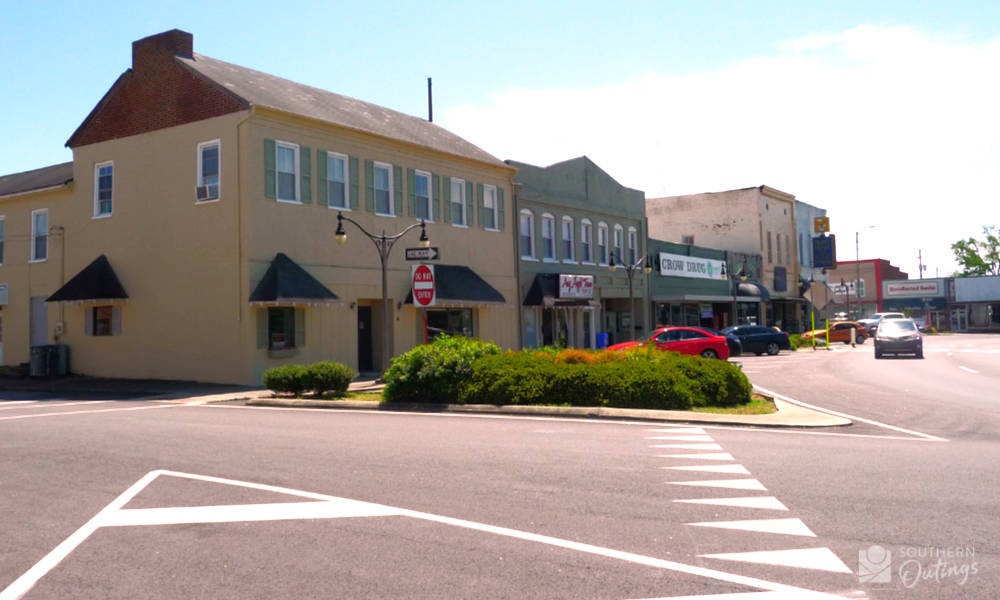 The c. 1888 and c. 1884 two-story buildings on the other end of the block are the nice results of the movement to rapidly rebuild after the fire.

Facing the old tavern building on the northeast corner is a nice c. 1907 two-story building. On the northwest corner, you will find the handsome c. 1922 Posey Building.

The two-story Ramagnano Building (c. 1875) and Fryar Building (c. 1892) sit side by side on the south end of the square. A c. 1906 two-story red brick building sits across the street just east of them.

The main street of Jacksonville is the busy Pelham Road which is also Alabama Hw. 21 on your map. It is labeled Public Square East and West at the square.

A block to the west of the square behind the bank with the white columns, the tiny Dr. J.C. Francis office building (c. 1850s) is found at the corner of Gayles Avenue and Clinton Street. It houses a tiny museum. It and it’s historical marker were recently restored.

It was listed with the National Register of Historic Places way back in 1970.

There are a few mid-1800s era houses near downtown.

Jacksonville oldest home, the Snow-Felgar House is two-blocks west of the square. It started as a cabin in 1832 and was remodeled in Greek-Revival style during the 1840s or 1850s.

Just a block to the north is the McCormick-Johnson-Winter House which is a c. 1840 jailhouse that was converted into a home over 150 years ago.

Four-tenths of a mile south of the square you will find the c. 1856 Ten Oaks, a striking mansion that was individually listed in the National Register in 2001.

Ten Oaks features Italianate design and 16-rooms. The historic marker in front of it tells the story of how it was headquarters for Confederate General Pierre T. L. Beauregard for a few days in 1864 before he led troops across north Alabama and then on to Nashville. It currently serves as a law office building.

North of downtown, there are two mid- to late-19th century houses across from the JSU campus. One is the c. 1853 Alexander Woods House, listed with the National Register in 1987. The other is “The Magnolias,” the home of Clarence William Daugette who was the university's president from 1899 to 1942.

Pictured: The c. 1853 Alexander Woods House (left) and The Magnolias

Next, the Henry Farm Barn was listed with the National Register in 1997 as the Charles B. Henry Barn. When built in 1915, it was a very modern dairy barn built out of concrete with advanced technology that allowed for milking 40 cows at a time.

According to the 1997 application, it was badly dilapidated at the time. But now, you can see it has been nicely resurrected as the unique Eagle Pointe Church.

You’ll find the only church I know of that has concrete dairy silos about a block from the rear of Walmart Supercenter.

About three miles south of the downtown square, the c. 1836 Alderholdt’s Mill is another building that’s listed with the National Register. I believe it’s being used as a residence at the present time. 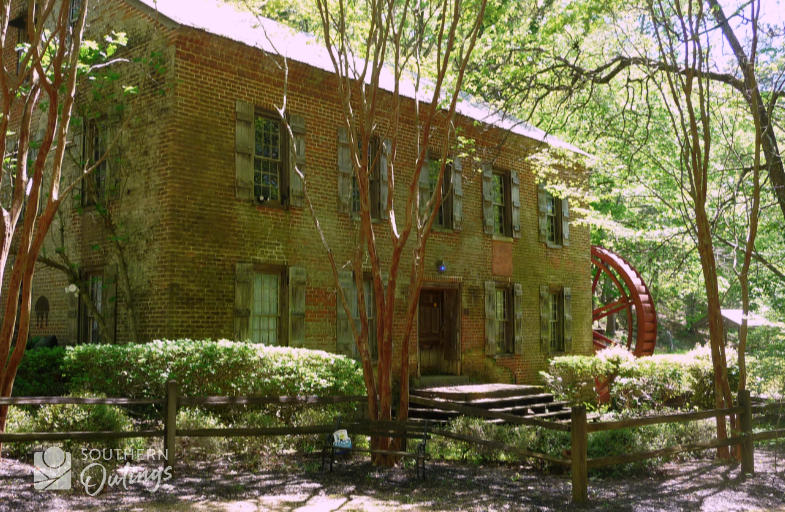 The Profile Cotton Mills Historic District was accepting into the National Register in 2006. It’s historically-significant structures include four mill buildings that were built between 1902 and 1910, and the adjacent mill village with over 100 small houses that were built by the company from 1905 and 1908.

The last historic place I would like to share in this article is the train depot. Originally built in 1860, it was restored in recent years to serve as a fantastic trailhead for the Chief Ladiga Trail. 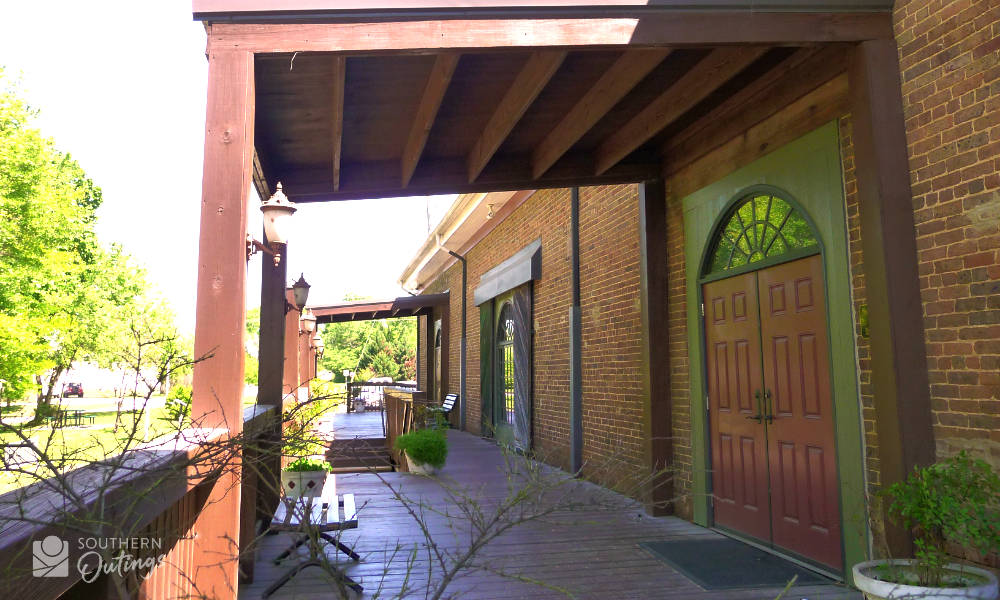 Sources for this article include the related applications to the National Register of Historic Places and historic markers.