Found about 20 miles south of the Chattanooga metro area and 14 miles south of the Chickamauga National Military Park, Lafayette is a city of about 7,500 people, and a good destination for a fun historic-places themed outing. Its top historic sites are easily accessible, and a sidewalk tour is a practical way to see most of them.

Three properties in this northwest Georgia city known as the Queen City of the Highlands are listed with the National Register of Historic Places. The c. 1918 Walker County Courthouse was listed in 1980.

The academy and the house are found adjacent to the city’s park about five blocks north of the heart of the commercial downtown. The combination of historic places and the park makes for a great greenspace. Several historic markers, a monument and a little pyramid made of cannon balls are found there — this is where the 1864 Battle of Lafayette took place.

Restored in 1971, the Chattooga Academy, also known as John B. Gordon Hall, is a brick 2-story, 2-room structure that's very well-preserved for a 183 year old. The historic marker in front of it tells about the battle. Hall was a confederate general, a U.S. Senator and he served as the governor of Georgia from 1886 to 1890.

Shown: The c. 1837Chattooga Academy and the adjacent city park.

The Marsh-Warthen House is now a museum and event venue owned by Walker County. Walker County Historical Society volunteers care for it. At the time of my July 2020 visit, I believe they were taking advantage of the coronavirus stay-at-home orders to make needed repairs to the house Spencer Marsh built, so it was not open for indoor tours.

Visit the following links to learn more about the Marsh-Warthen House:

Considering it’s location, it’s somewhat amazing that the house survived the war. The town didn’t fare well during the time that most of the residents fled to avoid the advancing armies.

The 102 year old Walker County Courthouse was built on Duke Street a long block to the east of what was the public square. A c. 1838 courthouse had been located at the square but it was torched by an arsonist in 1883. A new one was quickly built to replace it. The same unknown arsonist is believed to have set the 1883 courthouse ablaze but the fire was extinguished before much damage was done. Too big for the square, the present courthouse was completed in 1918. 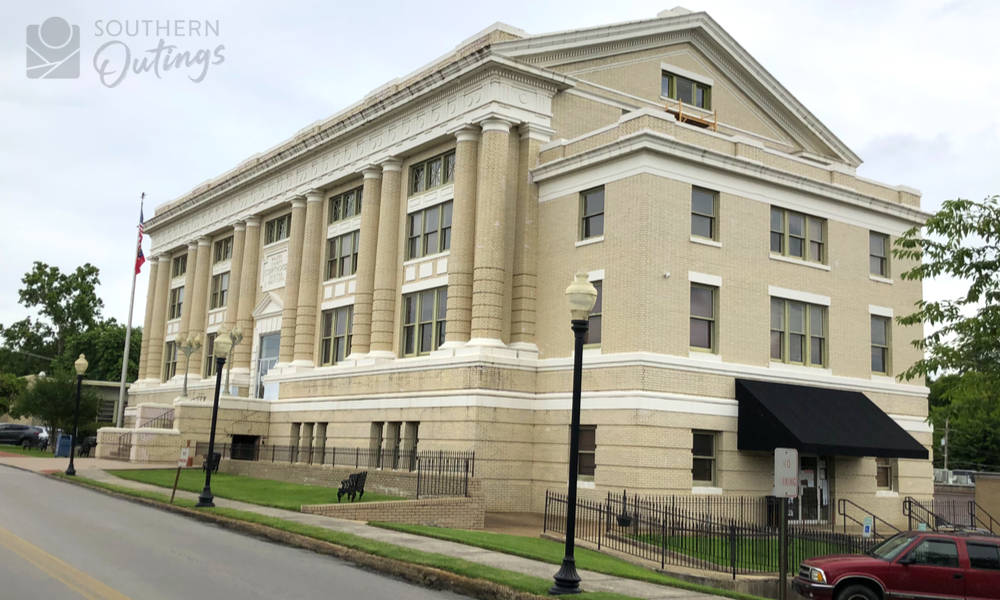 No other historic buildings or homes in Lafayette are listed with the National Register. That doesn’t mean there isn’t more to see. The primary downtown commercial district is a handsome area with a typical mixture of color and building sizes, the most interesting ones being the older two-story structures. And most appear to be from the 1880 to 1930 range.

A pair of historic churches and the old post office are just north of the square on Main Street. The santuary of the LaFayette Presbyterian Church was built in 1848. It was used as a field hospital during the Battle of LaFayette. The yellow brick is the result of some updates that took place in the 1920s.

Although a large First Baptist Church building was constructed in the 20th century, the congregation chose to preserve the old building found at the site of the original 19th century church building. The two are on adjacent blocks.

The old post office building sits between the Presbyterian Church and the older Baptist structure.

About five blocks west of the square, where Villanow Street dead ends into Chattanooga Street — literally on the other side of the tracks — the Mars historic commercial district features an old theater and eight or nine other interesting structures.  The Mars Theatre found there is home to Back Alley Productions., a live acting troupe.

The Station House restaurant and an active train office is also there.

Due to the close proximity of LaFayette to historic downtown Chickamauga and the Chickamauga National Military Park, a trip that combines those and LaFayette would result in a fantastic day. Also, Summerville is near. See my Summerville historic places article.

Sources for this article include related applications to the National Register of Historic Places, historic markers and Wikipedia.