“Some of the scenery highlights include densely-wooded Cumberland Plateau ridges, cove views, and a great creek view while you’re riding alongside the Larkin Fork which is perhaps the Paint Rock River’s most striking highland tributary.”

On the majority of Saturdays, I enjoy a 3- to 5-hour bike outing with a riding buddy or two. It takes rain or freezing temperatures to keep us off the road.

We are cyclists who ride only, for the most part, on rural roads. Since 2007, we have tried dozens of routes across north Alabama, northwest Georgia, and south Tennessee. It's a beautiful region full of farmland, ridges, valleys, rivers and lakes.

Some of the roads entice us to come back repeatedly with their light traffic, smooth pavement and captivating scenery.

Primarily, the smoother roads with practically no traffic entice us to return most often. But it’s the scenery that makes me consider them great places for road cycling.

I’m a sucker for a great view of the landscape. And, while my buddies may be riding primarily to keep off the pounds, or train for an epic charity ride, I’m riding to see the sights.

For me, these are 3- to 5-hour sightseeing trips. They are mini-vacations.

Alabama Hwy. 65 in the Cumberland Plateau's foothills
My overall favorite bike-riding area is an obvious choice. It has practically everything I could want for one of our Saturday rides. The roads have nearly-perfect pavement with much of it having been paved since 2016. The traffic on the upper part of Alabama Hwy. 65 may be the lightest of any roadway that we venture upon on a regular basis. And, the scenery is off the chart along Hwy. 65.

Some of the scenery highlights include densely-wooded Cumberland Plateau ridges, cove views, and a great creek view while you’re riding alongside the Larkin Fork which is perhaps the Paint Rock River’s most striking highland tributary.

We have seen whitetail deer, wild turkey, foxes and hawks along Hwy. 65.

Since 2016, We have probably enjoyed routes that include Hwy. 65 about four times a year. Here’s a map of the route we enjoy there most often: ridewithgps.com.

For that particular route we park at the old Princeton High School. We ride north on Hwy. 65 to downtown Huntland, TN and then on to Elora along Old Hwy. 122.

That is an out-and-back 51-mile route with a midway/turnaround point is a convenience store on new Tennessee Hwy. 122 in Elora. Sometimes we add some distance by riding into the area north of Elora.

An alternate route from Huntland to Elora is to take the new Hwy. 122. It’s flatter, straighter and has much more traffic than Old Hwy. 122. But it does have a wide emergency lane that makes a good bike lane, so the traffic isn’t really an issue. The scenery is a little better on Old Hwy. 122.

There are a large number of short hill climbs on the route, and some moderate mountain climbs. The climbs I remember most are Cedar Ridge near the state line both ways, and the Round Mountain climb at about 41.7 mile point on the map above.

The descent starting at about mile 36.5 on the map above and lasting unto about mile 41 is one of the best parts of the ride if you like flying effortlessly near to the ground through shady forests.

FUN FACT:
Alabama Hwy. 65 is also known as the Curly Putman Highway, named after the songwriter who was born in Princeton.

Cathedral Caverns State Park/New Hope/Lake Guntersville Dam area
This area features some very low-traffic in parts of both Marshall and Madison County, Alabama. There is a lot of smooth pavement, and there is a good variety of hills as well as some relatively-flat sections.

This area’s scenery is good thanks to the ridges, valleys, coves, forests and rivers. A great deal of row crops such as cotton, corn and soybeans are grown in the valleys, so there’s also some nice farmland scenery.

One of our favorite routes in this area starts at the state park, goes through New Hope, and then to the Lake Guntersville Dam. Here’s a map of that route on ridewithgps.com.

There are several optional roads along this route that could be used to increase or reduce the distance.

We usually start inside the state park at a small gravel parking area a few yards north of Cave Road. The actual cave and welcome center are on the side of Gunter Mountain over a half mile up the slope. So, if the ride starts at the cave, the ride concludes with a category 5 climb that includes a short but steep section. We’re usually pretty glad to avoid steep things when we’re 55 miles into a ride.

Ridewithgps.com shows 1,498 feet of elevation gain for this route. Interestingly, mapmyride.com shows about 2,000 feet for the exact same route. I tend to lean towards believing the latter is more accurate on this one.

Jackson County on the Hollywood/Fackler side of Scottsboro
It was around 2013 that we discovered that some of the country roads just to the west and north of Scottsboro, Alabama had a combination of smooth pavement and very light traffic.

Since 2013, we have ridden on one particular road in this area more often than any other road anywhere. It’s County Road 42. It starts in Hollywood and makes its way north until it turns to the east, going through the Fackler community.

The southern edge of the Cumberland Plateau is almost always in view as you ride along the eastern edge of Poorhouse Mountain, and pass just south of Crow Mountain. You often have a mountain on one side and a large field on the other, and you always see a lot more cows than people.

From one end of County Road 42 and back again is 26.2 miles. It’s relatively flat, but you are going up or down a 1- to 5-percent grade most of the time.

The out-and-back route we take most often in this area starts at the rear of Scottsboro High School. On County Road 33, it passes the Bellefonte nuclear plant before heading north to Hollywood. It then takes County Road 42 all the way to the convenience store on Alabama Hwy. 72.

Here’s a map of the route: ridewithgps.com.

Broomtown Valley and Back Valley around Gaylesville, Lyerly, Menlo and Summerville
Geographic features like Dirtseller Mountain and the Chattooga River along with several big valley views provide some great scenery here. Georgia’s lovely James H. “Sloppy” Floyd State Park with its picturesque lakes sits at the foot of Taylor Ridge on the east side of the area.

Cherokee County, Alabama, and Chattooga County, Georgia, have a good number of roads with smooth pavement and very light traffic.

Most of our rides in the area include passing through the town of Lyerly, Georgia. We usually start near Gaylesville, Alabama. The state park is usually our turnaround point. We have also enjoyed riding in the area from a Menlo starting point.

Almost every September, we participate in the Chattooga Century, an annual charity ride in the area that starts in Summerville. We always do the metric century.

Here’s a 44-mile route in the area that we enjoy in some configuration about once a month: mapmyride.com.

Cherokee County between Weiss Lake and Spring Garden
After learning that many Cherokee County roads north of Weiss Lake were great for bicycling, we decided to try the roads south of the lake. On our first ride there we learned which roads to avoid and discovered an overall excellent area for riding. There is a nice mixture of lake views, forested ridges and flat cotton country.

McLemore Cove/Chattanooga Valley in northwest Georgia
South of Chattanooga, the area in the valley on the east side of Lookout Mountain has some good roads for bicycling. The two roads that go to the southern end of McLemore Cove between Lookout and Pigeon Mountain have very light traffic and great valley scenery.

McLemore Cove is listed with the National Register of Historic Places due to some remaining mid-19th century to early 20th-century structures, and its agricultural significance. So I like to be on the lookout for some old farm houses and barns that are over 120 years old when biking in that area.

Pictured: New pavement on Hog Jowl Road in 2020, and a scene from the southern part of McLemore Cove.

I also enjoy riding through downtown Chickamauga where we see some other listed historic places including the Gordon-Lee House and the Chickamauga Historic District.

The closer you get to Chickamauga, the heavier the traffic, especially in the city limits.

The Ironman Chattanooga Triathlon bike route travels through this area.

We usually start at the point where that triathlon turns back to the north at Mountain Cove Resort.

Here’s a map of a 46-mile ride starting and ending at Mountain Cove: ridewithgps.com.

For a longer ride, we have ridden to Chickamauga Battlefield and back from Mountain Cove.

Between Rome and Villanow, Georgia
This area includes some of the John’s Mountain Wildlife Management Area which I believe is also part of the Chattahoochee-Oconee National Forest.

The roads that run north and south through the narrow valleys on each side of John’s Mountain between Armuchee and Villanow feature miles of forest and valley views. Those include Pocket Road, Everett Spring’s Road, Haywood Valley Road, Farmersville Road and East Armuchee Road.

You’ll usually see a good number of people fishing in the area where John’s Creek runs parallel to Everett Spring’s Road, an area with a state park-like setting.

A fantastic annual charity ride, Up the Creek, utilizes this area for it’s 53-, 71- and 104-mile routes. Here’s the ridewithgps.com map for their 71-mile route. 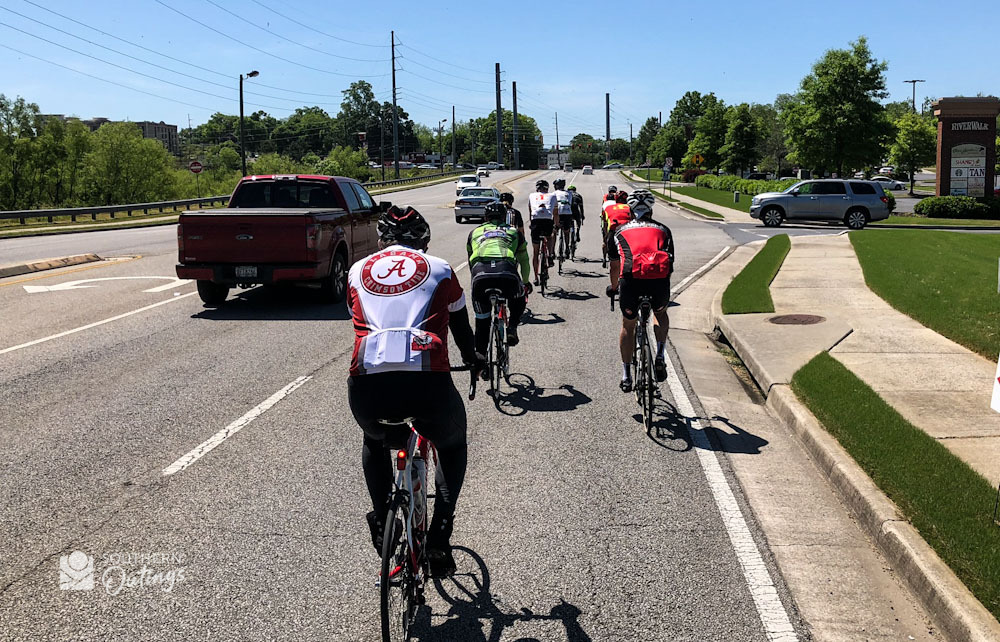 In Rome as we complete the 2019 Up the Creek ride

Sand Mountain/Lake Guntersville in Alabama
Another great riding area that we often enjoy from the saddle of our bicycles is roughly between Lake Guntersville State Park, Scottsboro and Fyffe.

One of the favorable biking roads in the area is the 18.7-mile long Jackson County Road 67 which goes alongside the lake from the Tennessee River bridge at Scottsboro through Langston to Alabama Highway 227 near the entrance of the state park. It features lakeside forests, lake and ridge views and smooth pavement. The traffic is pretty light but it can be a little heavier when the boat ramps, marinas, resorts and popular swimming places are busy.

We have enjoyed close encounters with bald eagles on County Road 67.

Highway 227, which changes into DeKalb County Road 400, is also good for biking. It is wide, pretty smooth and has long hills. The traffic is fast but light. It features one of the mildest mountain climbs in the region but also has a category 5 climb at Morgan’s Cove.

DeKalb County Road 43 was recently resurfaced with smooth asphalt. It’s 6.4 miles long and features several mild hills. We often use it as an out-and-back connection between 227/400 and places to the north around Fyffe and Rainsville.

Here’s a map of one of our routes in this area: ridewithgps.com.