Historic places tourism in downtown Rome, Georgia (with over 50 photos)

With features such as hilltop panoramas, towering steeples and bell towers, a winsome variety of bridges, a number of statues scattered about, and several jaw-dropping buildings, Rome satifies an appetite for easily-accessible historic vistas like few small cities in the South can.

There’s more than you can see in a day. If you haven’t been there before, and you enjoy visiting historic places of the late 19th century variety, a long weekend would be a good starting point. In my opinion, a vacation of five days or more would be very enjoyable, especially for history nerds who are also lovers of the outdoors.

Historically, Rome offers a rare variety of sites and scenes. An old clock tower on one hill and an old cemetery on another hill are like bookends for a downtown full of 19th-century delights. The old part of Broad Street is big, bold and full of color. Several amazing 120 years or older houses are found in residential areas near to downtown.

In addition, two small universities with lovely historic structures of their own are found in Rome. They will be covered in future articles.

Shown above: The c. 1877 Masonic Temple on Broad Street

FUN FACT: The Rome Masonic temple completed in 1877 was a replacement for the previous structure that was burned down during the Civil War. Many of the Union soldiers who were also Masons were remorseful for what had been done, and a good number of them contributed financially to the funds used to build the striking new temple.

Rome’s 20 National Register of Historic Places listings include eight districts and 10 individual structures, along with the cemetery and a lock and dam site. The listings featured in this article include:

The outstanding Between the Rivers Historic District

For a historic-places enthusiast like myself, the Between the Rivers Historic District is exceptional. It includes the city’s historic nucleus on a peninsula formed by the Etowah River on the north and the Oostanaula River on the south.

Three of the individually-listed structures — the courthouse, the clock tower and a striking post office/federal building — are inside the district boundaries. A good number of Rome’s grandest old churches and the historic portion of the spectacular Broad Street are also found there.

According to Rome’s Office of Tourism website, romegeorgia.org, the Between the Rivers Historic District is “the largest Victorian era district in the state of Georgia.” So you would be correct to assume there are some amazing 1870 to 1899 era houses to complement those other monumental structures and that epic downtown commercial strip.

Here’s 20 recent photos from the residential portion of the Between the Rivers district.

As you can see, a few of the old houses are currently being used for business purposes. This is the case on the edges of the commercial areas, but it in no way reduces the appeal of those structures. In fact, the few houses that are now home to — for example — law firms or health care providers have been nicely renovated in recent years, or are currently being restored.

The churches of the Between the Rivers Historic District

Next, let’s take a look at the churches within the Between the Rivers Historic District. Built in 1958, the First Baptist Church santuary was too new to be considered a contributing property of the district at the time Between the Rivers was accepted into the National Register in 1988.

The St. Peters Episcopal Church was completed in 1910. The main parts of the First Methodist Church and the First Presbyterian Church were constructed in 1856 and 1888 respectively.

Another historic place of worship, the St. Paul AME Church, is also in the district.

The Rome Clock Tower was listed with the National Register of Historic Places in 1980. It’s actually a water storage standpipe with red brick siding topped by a wooden structure that houses a four-sided clock. The tower has a spiral staircase that leads to the top, but the public is not allowed inside the clock portion. Part of what was the storage tank now has the look of a museum with murals on the steel walls and the old clock mechanism on display in the center of the room.

Now the focal point of a small city park, the 149-year-old structure overlooks Rome from the crest of a steep hill, and is surrounded by some of the Between the Rivers Historic District’s most amazing historic houses. The landscaped portions of the park have names. The southern edge next to the parking lot is called the Bailey Park. The area immediately surrounding the tower is called the As Time Goes By Garden.

Height: The 63-feet tall brick section and the 41-feet tall white wooden clock section combine for a total of 104 feet.
Original construction: The tower was built in 1871. The clock was installed in 1872.
Location: 410 E. 2nd Street; Rome, GA
Parking: There is a parking lot that you can get to on the East 2nd Street side only.
Admission: Admission is free, but tours of the inside of the structure, which includes going up the stairs to the clock viewing deck area, are only available five days a year — the first Saturday of May, June, July, August and September. In 2020, this schedule was affected by the coronavirus. Private tours and group tours are available for a fee.

See the Rome Office of Tourism’s feature page about the clock tower: romegeorgia.org/attraction/city-clocktower. 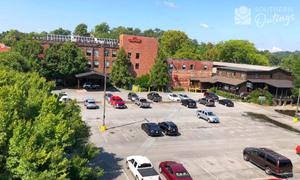 You’ll find this one-of-a-kind hotel near the banks of the Oostanaula River on the western edge of the Between the Rivers Historic District, and only a block from Broad Street. Each room at the Hawthorn Suites by Wyndham Rome has a unique personality that only a historic building can provide.

Stay here and you’ll be within walking distance of most of the places mentioned on this page including the pedestrian bridges, the Heritage Trail System, Town Green, the entertainment district, Myrtle Hill, the Clock Tower nd the historic courthouse.

It only seems logical for historic-places tourists to stay in a 120-year-old warehouse that’s been converted to the city’s top-rated hotel on Tripadvisor. Check the latest prices.

Another monumental sight is near the banks of the Oostanaula and only three blocks from the clocktower. The former Floyd County Courthouse building was built in 1892-93 at a cost of $49,935. It was listed with the National Register of Historic Places in 1980. It was Floyd County’s fourth courthouse. The current courthouse — the county’s sixth — was built in 1995 adjacent to the historic courthouse shown below.

The historic courthouse is presently used as a tag office and some police department offices.

Accepted into the National Register of Historic Places in 1983, the cemetery is found on a steep hill at the point where the Etowah River and Oostanaula River converge to form the Coosa River. A bridge on Broad Street that crosses the Etowah will take you near to the foot of the hill.

You can enjoy a dramatic view of downtown Rome from the top of Myrtle Hill.

There are several restaurants and a few nightclubs and pubs along historic Broad Street. Many are located in buildings that contribute to making the Between the Rivers Historic District such an exceptional collection of sites.

The most popular eateries are likely the regional and national chains such as Jefferson’s, Moe’s Original BBQ and Mello Mushroom, but I have noticed during my recent visits that there have also been some pretty good crowds at most of the locally-owned establishments.

Other things to see and do in downtown Rome

If you like to walk, jog or ride a bike, remember to enjoy the riverside Heritage Trail system. There are two walking bridges that cross the Oostanaula River. One is the historic Robert Redden Footbridge that has become known as the Lock Bridge due to the many padlocks and combination locks that individuals have placed there, and the other is the lovely new Chief John Ross Memorial Bridge that provides another way to get from the west side of the river to the Town Green and the nearby Broad Street.

A statue of First Lady Ellen Axson Wilson, who grew up in Rome, greets you on the east side of the new bridge at Town Green. There are also several stone historic markers on the Town Green property.

In addition to the Ellen Axson Wilson statue, Rome has a good mixture of other statues, most of which can be found near to the city and county government facilities. Across the street from the historic courthouse in the lawn of the police department on 5th Avenue there’s the moving "Call to Duty" statue depicting an officer bowing to pray while holding a folded American flag.

A bronze statue and other memorials are found at the Rome Firefighters Memorial Plaza near city hall on 6th Avenue.

You will find a bronze statue at the historic Rome city hall and auditorium depicting U.S. Navy Admiral John Henry “Jack” Towers who grew up just a few blocks away. A 4-star admiral, he served in the Navy from 1906 to 1947 and is known for establishing the Naval Air Training Station in Pensacola and for helping make aviation an integral part of naval capabilities.

The city considers the area of the city hall lawn where the statue is found to be the Admiral Towers Memorial Plaza.

Directly in front of that same building, the Capitoline Wolf statue depicts a mythical mother creature nursing baby Romulus and Remus. It’s a replica of a 1,000-year-old statue found at the Palazzo dei Conservatori museum in Rome, Italy. Italy’s Rome presented it as a gift to Georgia’s Rome around 1929-30.

Check out these items that feature a scene from Broad Street:

The products are available from the Southern Outings print-on-demand shop — they don’t exist until someone orders them. The graphic was inspired by the great combination of historic buildings and potted plants found on modern-day Broad Street.

I also offer a color version:

For more thing to do in the area, please see my other articles about Rome and other nearby historic towns:

Sources for this article include the related applications to the National Register of Historic Places and the following: