Nostalgic charm welcomes U.S. Hwy. 11 travelers to historic downtown Springville, Alabama, with a unique and delightful mixture of mostly small old commercial buildings and large old houses. Perhaps more than any other old downtown in the region, the narrow Main Street scene likely appears much as is it did 100 years ago.

The Springville Historic District — it was registered with the National Register of Historic Places in 1997 —  features a lot of great old porches and windows, as well as vintage signs and other nostalgic diversions.

Did I mention porches? The porches may be the one thing you will remember most.

As is true with other downtowns along U.S. Hwy. 11, such as Fort Payne, Collinsville and Attalla, I-59 took away a great deal of the traffic when it opened in the 1960s. Most travel between Chattanooga and Birmingham has bypassed these downtowns since that time.

While enjoying Springville’s porch-filled town setting recently, I couldn’t help but think that that has turned out to be a good thing. Without I-59 taking away all that traffic, they may have been tempted to widen the street through the heart of Springville, and many of the old buildings, and those storefront porches that are only a few inches from the street, would have been razed or moved.

It’s only about 20 miles from Birmingham and surrounded by rapidly growing neighborhoods. Yet, the Springville Historic District should be able to safely retain its charm for many more decades.

FUN FACT: Much of the motion picture, Rustin, was filmed on Main Street in Springville. There are five or more Main Street scenes in the movie trailer alone:

It’s easy to see why they thought the quaint downtown would be a good setting for the fictional town of Rustin.

One of the commercial buildings, the c. 1902 building at 601 Main Street, was individually listed with the National Register of Historic Places in 1982 as the Presley Store. It’s pressed metal and iron ornamentations make it unique.

FUN FACT: Every structure pictured above is along a half mile stretch of Main Street. That means you can park just one time, and enjoy a one-mile roundtrip sidewalk tour while taking in most of what makes downtown Springville an excellent Southern outing.

The marvelous Big Springs Park is also found downtown. I parked in the shade near the park’s lake on the day I walked up and down Main Street to take the photos for this page. 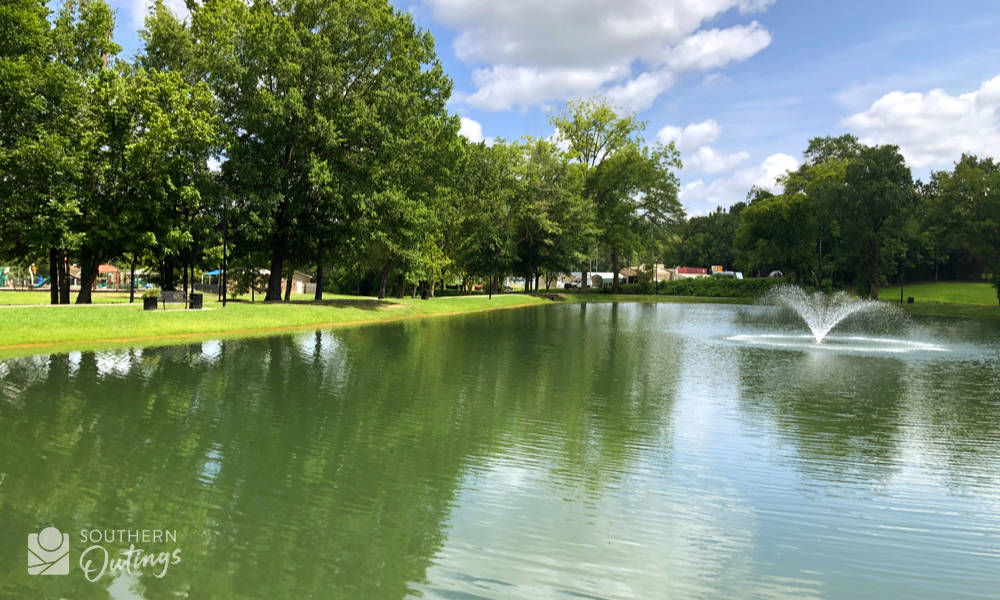 The lake at Big Springs Park

A Birmingham-area outing, the Springville downtown also features antique shops, boutiques, a coffee shop, a pizzeria/ice cream shop and a couple of other dining establishments.

On the day I toured Springville, I enjoyed visiting the three covered bridges of Blount County, the historic downtown of Oneonta, along with a stop at the Ashville courthouse square and surrounding 19th-century structures, so it would be easy to recommend a similar outing to any historic-places enthusiast.