Only about 16 miles north of Scottsboro, Alabama, and 16 miles south of I-24 at Kimball, Tennessee, Stevenson is another small town with a pleasantly-surprising roster of historic places.

Three individual properties are listed with the National Register of Historic Places:

One district, the Stevenson Historic District, is also listed. The nicely-preserved depot and hotel property and the commercial buildings watching over them are visually engaging, to say the least.

Since the 1850s, two important railroad routes have met in downtown Stevenson, and it’s obviously that a depot had been the focal point of the village that was built at the foot of a small mountain for a long time.

A fire in 1911 destroyed most of the commercial area, so most of what is there today was built after that time.

The Gen. William Rosecrans Headquarters, left, also known as the Rosser-Alston House, was built as a railroad engineer residence in 1855. It was listed with the National Register of Historic Places in 1978.

Rosecrans occupied the house for a few weeks leading up to the bloody Battle of Chickamauga.

I drove past the site in March 2020, and saw only a chain link fence. The remains may be only a pile of brick at this point.

Fort Harker was listed in the National Register of Historic Places in the late ’70s. It, along with the other redoubts, medical facilities, refugee camp and blockhouses built in Stevenson during the war provide a fascinating war story. You can see a 1860s photo and read more about Fort Harker here.

Today, there’s a state historical marker at the site and you can see what remains of the fort’s earthern walls and moat. A little over a half mile directly south of the historic downtown, it’s mantained by the town, and has the appearance of a lakeside park.

Presently, the depot is being operated as the Stevenson Railroad Depot Museum. Displays feature items related to Native American culture, pioneer life and Civil War events. The eight-room hotel is used for storage.

Based on the information I have found, the structures appear almost entirely the same as they would have appeared 147 years ago.

The town has an epic park that’s about 1.4 miles from the downtown right on the Crow Creek part of Guntersville Lake. Sometimes the pier at the boat ramp and the shoreline can be covered with water, but the park is an excellent location for birding, kayaking, picnicking and watching sunsets. 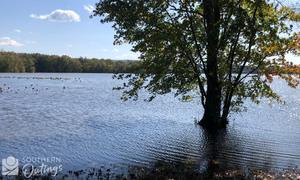 Due to it’s location, it would be logical to visit downtown Stevenson on the same road trip as downtown Scottsboro and downtown Bridgeport, and/or downtown South Pittsburg.

My resources for this article include the following:

The Stevenson-related applications to the National Register of Historic Places