Many historic places look their finest in the summertime. Blooms, green grass, sunshine, a park with a lake, and elaborate 19th century structures are a great combination when it comes to beautiful streetscapes and sidewalk scenes.

This is certainly the case the downtown Huntsville.

This article features over 40 photos from scenes in the following downtown Huntsville, Alabama treasures:

The park, which had already been a beautiful and fascinating green space for decades, has been improved recently along with most of the surrounding properties. The improvements include expanded sidewalks/walking paths, benches, streetlamps and landscaping. They also renovated the famous red foot bridge.

The city is named for John Hunt who settled in 1805 near to where spring water emerges from the base of a rocky cliff. The park’s best features are the spring itself along with the canal and lake into which the water flows. The east end of the park where the spring is found is adjacent to the historic public square. The rear side of a striking c. 1835 bank building is found at the top of the cliff above the spring. 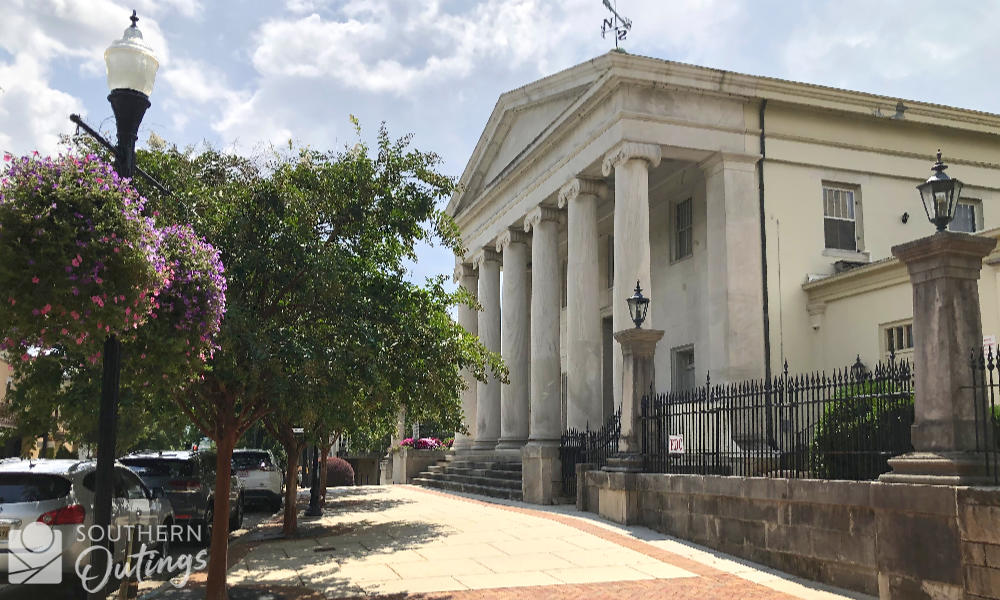 When I visit the area, I like to park in the public square area and enter Big Spring Park from West Side Square between the front of that historic bank building and Spring Street. You can make your way to the spring and canal by going down some steps. You’ll pass a beautiful fountain about halfway down.

To help celebrate the historic significance of the spring and canal during Alabama’s bicentennial celebration in 2019, Huntsville Utilities installed some information signs and dubbed the area the “Huntsville Water Trail.” You’ll see the signs and banners at the entrance and along the canal.

Here are some photos of Big Spring Park showing the area between West Side Square and Church Street:

The canal passes under Church Street and empties into the pictureque manmade lake that’s surrounded by the Von Braun Center complex, new hotels and the Huntsville Museum of Art.

The original red bridge was a gift from the nation of Japan. It’s one of the best places to get a good look at ducks and geese, and also the abundant schools of koi carp. The canal and lake are full of the Chinese fish.

At the southwest corner of the lake you’ll find a new tunnel that allows you to walk along the canal as it passes under Monroe Street to the Von Braun Center complex. You’ll find the Thrasher Memorial Fountain on the west side of Monroe and a beautiful path that goes all the way to where the canal empties into Pinhook Creek.

Here’s a few photos of the sights between the tunnel and the creek:

Stay within walking distance of the places mentioned on this page Many of the rooms at the AC Hotel Huntsville, above, provide city/lake views.

Some nice new hotels have been constructed in recent years to complement a large convention center hotel that opened in 2006. The result is a nice variety of lodging options near the city’s center. At least three other new hotels are currently under construction, and more are planned as the city increases its number of available rooms for convention purposes.

If you plan to stay overnight, or for an entire weekend, you’ll be within walking or bicycling distance of most of the sites featured in this article when you book a room at one of the properties that overlook the Big Spring Park lake. Those are:

Alternately, a 10-year old Springhill Suites and a 7-year old Homewood Suites by Hilton are each within a half mile of the lake.

Huntsville was incorporated as a town of the Mississippi Territory 10 years before Alabama became a state. The 211 year old city’s public square is at its best when the green shade trees and blooms are at their peak in the months of June through September.

See more photos of the public square and other historic Huntsville sites on my article, Huntsville historic places part 1.

If you take a summer sidewalk tour of the public square, you should consider also enjoying the adjacent streets such as Washington Street. 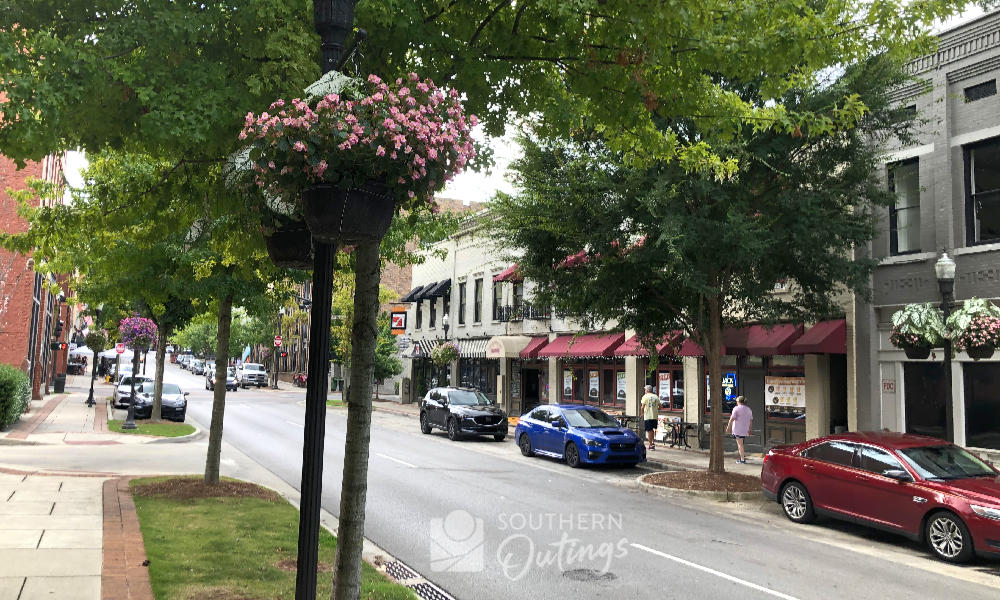 Known primarily for it’s big inventory of early 19th-century houses, naturally the amazing Twickenham Historic District is also home to a great number of beautiful lawns and gardens. The streetscapes go on and on, and if you choose to take a sidewalk tour of any street in the district, you will not be disappointed.

Much of the district is within walking distance of the public square. Check out this gallery of some of the highlights:

Without a map that outlines them, it’s hard to tell where the Twickenham HD ends and the Old Town HD begins. That doesn’t matter. As a whole, it’s slightly less manicured, but an Old Town sidewalk tour is equally fullfilling for anyone who enjoys historic places, popular 19th century architecture or lovely streetscapes.

I hope you enjoy these photos showing some of the visual highlights from the summer of 2020 in the Old Town Historic District: