If you have spent any amount of time exploring this website, it’s obvious that a good number of the articles and photo collections feature historic downtown business districts. It’s no secret that visiting them for their nostalgically-appealing streetscapes has become one of my favorite pastimes.

When I visit a small city to see its historic places, I almost always head straight for the historic commercial area to enjoy a sidewalk tour.

I want to see every historic downtown in the South — at least the ones that are as gorgeous as the one they have in Cedartown. It’s an excellent place to enjoy checking out the variety of architectural styles that were popular from the 1880s to the 1910s.

The main takeaways from my July 2020 visit to the city, which was the first time I had been there to do anything other than ride my bike on the Silver Comet Trail, are:

Here’s a gallery featuring many of commercial buildings on Main Street in Cedartown, many of which were built in the 1880s and 1890s.

One of the most nostalgic structures is the c. 1941 West Theater which is currently painted a mint green color.

The downtown historic district was listed with the National Register of Historic Places in 1992. Follow this link to view a PDF of the district’s application to the Register: Cedartown Commercial Historic District.

On the southern edge of the district you will find a replica of the c. 1920s train depot that was torn down in the 1970s. The city built it in 2004 at the same location as the old one had stood. It serves as a welcome center for the hundreds of bikers, joggers and hikers who use the Silver Comet Trail each week.

The depot is also a little museum with information about the city’s history. It’s a good place to learn about one of the the city’s most famous natives: mid 20th-century Hollywood actor Sterling Holloway who is best known as the voice of Winnie the Pooh.

Three other nationally-registered historic districts are found in the city:

The Waterworks, Woman’s Building and Big Spring Park Historic District and the Northwest Cedartown Historic District are adjacent to each other on the northwest side of the Main Street area, so it’s pretty easy to combine them in one sidewalk tour. There are places to park along Wissahickon Avenue.

The c. 1892 Waterworks Building sits on the east side of the small park, and the stone exterior c. 1936 Woman’s Building sits on the west side. The productive spring provides water for the entire city as it has since before the town was incorporated over 160 years ago. The springwater flows into a branch that starts as a small concrete canal. The branch empties into Dry Creek about a half mile to the east.
The current appearance of the park is a result of work done by the local garden club in 1935-36. The Woman’s Building was built by the Cedartown Federated Woman’s Club, a coalition of six separate clubs, to serve as a clubhouse/community gathering place.
I don’t know why they gave this district such a long name back in 2000. Seems to me, simply calling it Big Spring Historic District would have been more logical.

The Northwest Cedartown Historic District was listed with the National Register in 2008. Many of the district’s older and more interesting houses are found in the portion of the district nearest to downtown and the park shown above.

Most of the houses I captured snapshots of are located on Wissahickon Avenue, Cave Spring Road and N. College Street.

Cedartown’s other primarily-residential, nationally-registered district — the South Philpot Street Historic District — is on the east side of Main Street. There you will find several houses that were built between 1880 and 1910 including several striking two-story ones. Noticeable styles include Queen Anne, Neoclassical Revival, Colonial Revival and Craftsman.
I will always remember the district for the steep hill I climbed on my bike to get near to the Queen Anne house at the corner of Noyes and Highland that had a rock retaining wall and two lion statues.
Other visually-pleasing two-story historic houses are very near to that one. A couple of them appear to be abandoned. Maybe they’re haunted. They certainly have a look that would motivate me to avoid them at night.

Besides the three districts featured above, Cedartown also has two buildings that are individually listed in the National Register of Historic Places. Those are:
The library opened in 1921. It was restored in 1977 and has been operated as a museum by the Polk County Historical Society since that time. 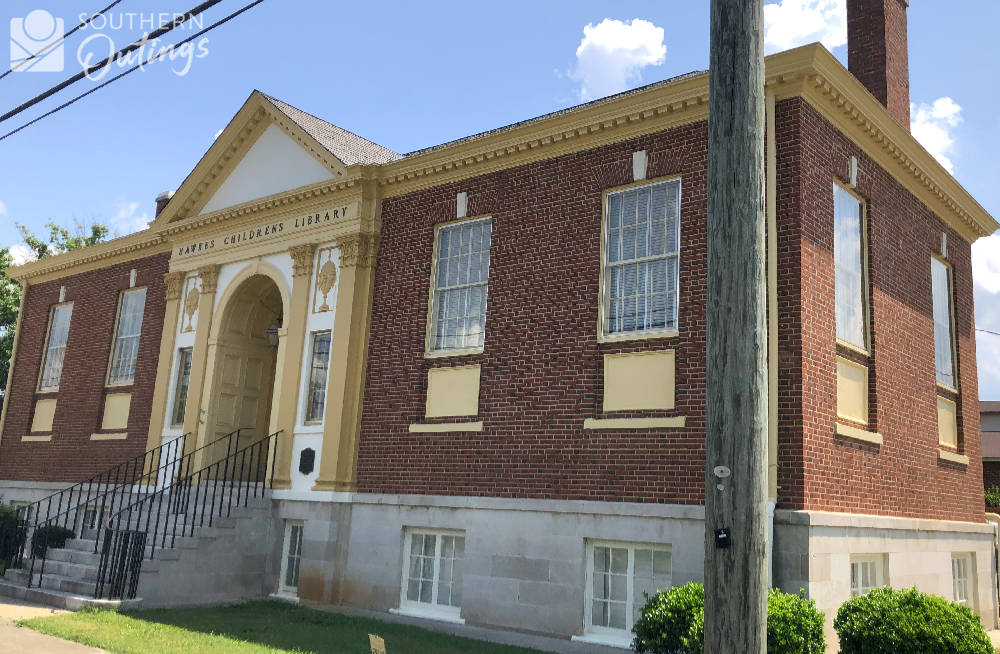 The c. 1921 Hawkes Children’s Library is currently a museum

The historic library building is near to the c. 1950s Polk County Courthouse which has several statues in its lawn. The statues honor Cedartown and Polk county natives who became celebrities. One of them was pro golfer, Doug Sanders, who was born in Cedartown in 1933. 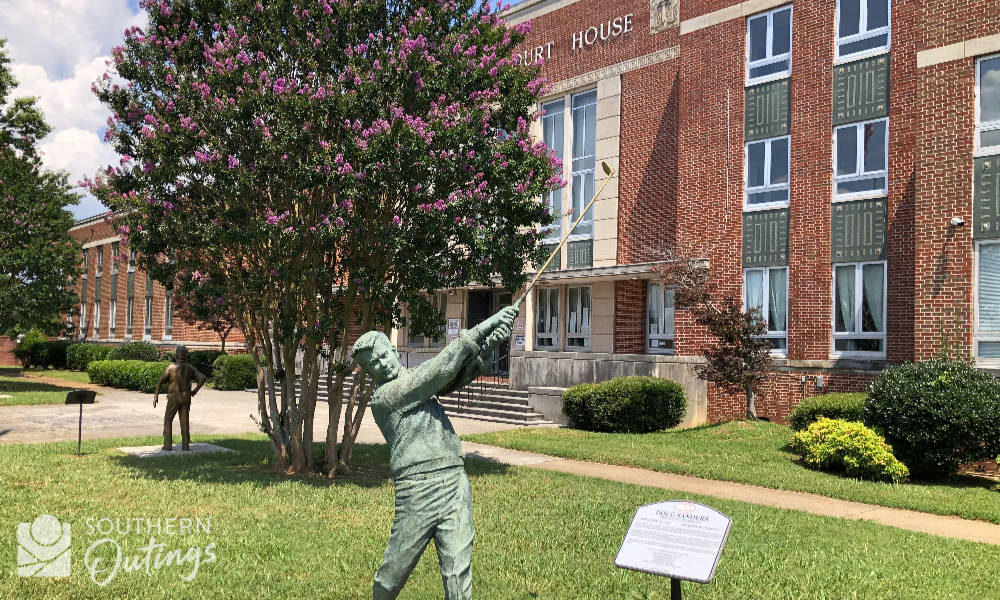 FUN FACT: The first courthouse in Cedartown was built in 1852, but Union troops burned it down during the Civil War along with 65 other buildings.

Here’s a few other random photos from places in Cedartown that I thought I would share:

Please see my articles about other historic places in nearby towns:

Sources for this article include the related applications to the National Register of Historic Places, and the following: