At this long and winding canyon on Lookout Mountain near Fort Payne, adventurous hikers can visit magical places such as secluded waterfalls, giant rock formations and dense forest areas that few people ever see (with 18 photos)

Some of Alabama’s most amazing sights are found at Little River Canyon. Each week in the spring, summer and fall, several thousand tourists see Little River Falls. On fair-weather weekends, you’ll find multitudes touring the Canyon Rim Parkway to see the panoramic views from over a half dozen scenic overlooks, especially during the autumn color display.

The waterfall and other well-known places like the Wolf Creek overlook, Grace’s High Falls, Crow Point, Hippie Hole and Mushroom Rock are easy to enjoy because it doesn’t take a great deal of effort to see them with your own eyes.

But the canyon also contains many extraordinary hidden wonders that are not so easy to get to, but can be rewarding for anyone who likes to discover things that few have encountered. Expect to be wowed by the size of some. Expect to be enchanted by the beauty or peculiarity of others.

Getting to these lesser-known sights can take hiking in difficult terrain along the river, in creekbeds or at the lower edge of the bluffs along the canyon rim. Each can make you feel as if you are in an extremely remote location, but in most cases, you’re no more than a mile from your vehicle.

Here’s some insight for finding some of Little River Canyon’s most enchanting hidden places.

Due to the photogenic nature of its waterfalls, cascades, and hardwood trees, Wolf Creek has been the area that I have visited most often at Little River Canyon. This relatively easy-to-get-to creek bed is a nice destination on its own, especially during the fall color peak.

There is no official trail, but a large enough number of hikers and other mammals travel up and down the east side of the creek to the hidden waterfalls known as Greg’s Two Falls that a trail of about 450 to 500 feet in length does exist before it fizzles out at the lower waterfall.

You’ll want to allow time for exploring the creek bed just below the twin waterfalls where a tall, layered rock face and other curious sandstone formations are found. The upper waterfall is about 20-25 feet in height, while the lower one is a little shorter, depending on how deep the water is in the pool that it falls into. The water is often a vivid turquoise color at that spot.

If you continue downstream, you’ll follow the creek until it empties into the river. Under most conditions you can then hike through the rocks and bushes along the north side of the river in either direction.

To enjoy the wonders of Wolf Creek, park on the side of the road in the wide grassy area found near the bridge where the creek goes under the road, but make sure your catalytic converter doesn’t start a forest fire.

Hike to the jungle along Bear Creek

Although you will frequently hear the sound of vehicles on the Canyon Rim Parkway which is only yards away in most cases, a hike along Bear Creek will take you to an area that looks and feels like you’re deep in a dense jungle. In an area where the creek curves sharply through its narrow gorge, and sheer rock walls are present on both sides of the water, you will find some extremely thick vegetation due to the type of trees, bushes and vines that shrive on the steep, rocky slopes.

It’s very difficult to pass through that area, and some other narrow places, unless it has been dry for several days. If the water is above a certain level, forget it.

Along with the jungle-like scenes comes jungle-like wildlife, insects and wildflowers. Bear Creek is a good area to watch for woodland birds, and small fish. I once saw a large hornet’s nest hanging right above the center of the creek.

Dropping from 1,150 feet to 785 feet above sea level, the 2.6-mile long section of Bear Creek that’s inside the national preserve is much flatter than the other creeks and streams at the canyon. But, that doesn’t mean it’s easy.

When you hike along Bear Creek, it’s important to remember how difficult the terrain will be. Don’t expect to cover as much ground as you would if you were hiking on an actual trail. It would be easy to bite off more than you can chew.

The simplest ways to get to Bear Creek are from the Eberhart Point Trail (map) on the south end, or to slide down the slope near where the Canyon Rim Parkway crosses the creek on the north end. For the latter, you will need to find a spot where the slope is mild enough to allow you to get to the creek bed.

The easy to get to bluff overhangs near the Lynn Overlook

In most of the classic Roadrunner cartoons, Wylie Coyote caused at least one cliff overhang to plunge to the canyon floor, taking him with it. Little River Canyon has many similar overhangs. People stand on some of them at scenic overlooks, usually unaware.

Less than 2,000 feet from the Lynn Overlook, some dramatic overhangs sit together like a peculiar family of rock behemoths. Unlike most rocky bluffs along the canyon rim, you can walk right up to these due to the gentle slope that’s found at their feet.

There’s also a pair of wet-weather streams in the area. The small waterfalls and cascades are great if there has been enough rainfall. Part of the easternmost stream serves as a trail used often by kayakers to exit the Suicide Section of rapids which are almost directly under the Lynn Overlook.

Parking is easy. If rock climbers or kayakers haven’t taken up all the space, you can park on a small gravel area (map) and just make your way to the west along the bluff. Also, there’s always plenty of room to park at the nearby gravel lots at the Beaver Pond Trail and Lynn Overlook.

Gigantic boulders in the riverbed

The big sandstone boulders that you find scattered along the river throughout the canyon aren’t really hidden. Some may be seen in the distance from almost every scenic overlook. But you must stand beside one of them yourself, or see a kayaker or hiker near one for some perspective, before you can really appreciate their enormity.

In the photo above, the bottom 20 to 40% of the boulder, which is directly in the riverbed, is usually hidden underwater. Hiking in the riverbed is only possible during droughts. The river’s water levels can vary by over 20 feet.

To me, many of the giants seem out of place. They sit there, unattached, while appearing to be moveable if enough force was available to move them. Each one certainly did move down from the bluff at some point in the past few thousand years.

About 35 years ago, a rock slide that included a very large boulder slid down to the edge of Bear Creek not far from where the creek flows into the river. It took down every tree in its path while leaving the steep slope rather smooth. Imagine what that sounded like.

Groups of riverbed boulders are responsible for some formidable whitewater rapids, and the kayaking community has named some of the sections where giant rocks are found with monikers like Suicide Section, Humpty Dumpty and Bottleneck. 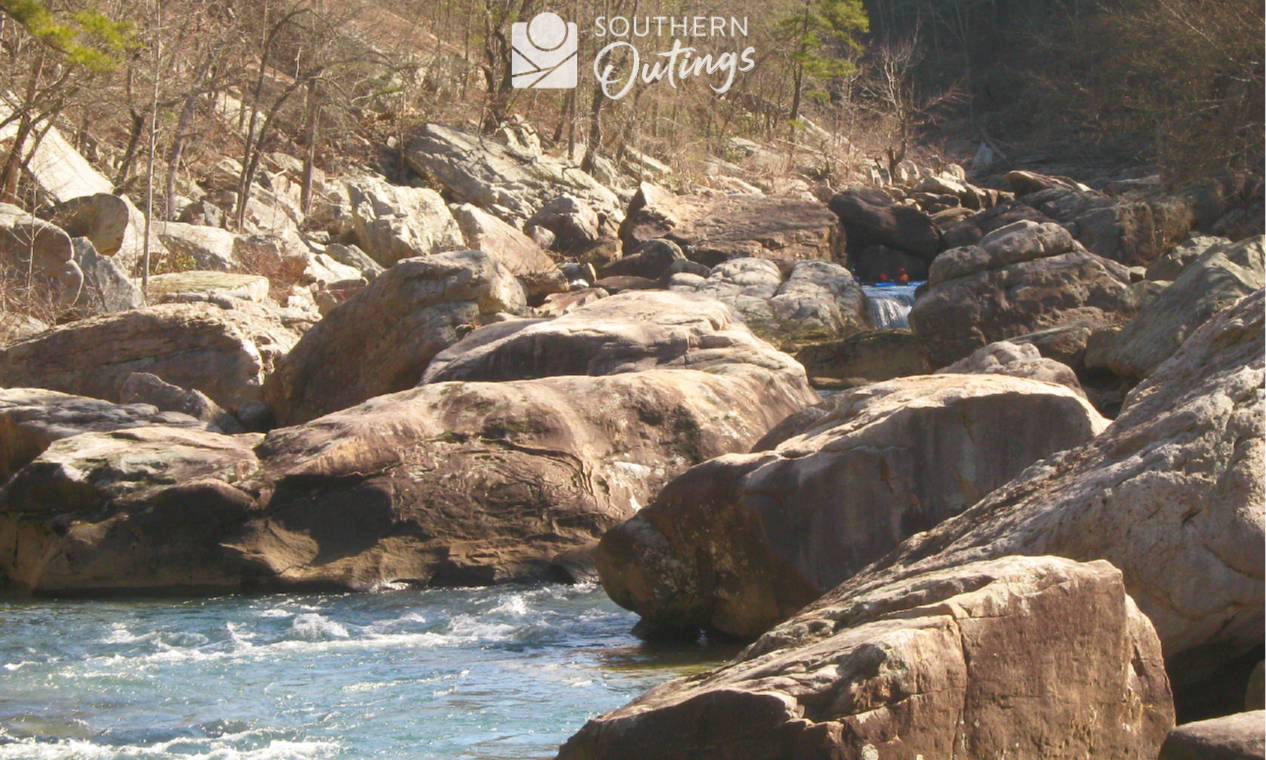 Above: Can you spot the two kayakers in ths photo?

You can hike to some of the giants from almost any place that you can get to the river. Go downstream from the Hippie Hole, a popular swimming spot not far from the Little River Falls parking lot, during a drought for some of the best ones. You can hike in from the stream near the Lynn Overlook, take a left, and find yourself looking at the giants of the Suicide Section shown above. Get to the river from Wolf Creek, then take a left, and you will not be far from the Humpty Dumpty rapids where you can get a close look at giant boulders regardless of the water level.

Hike in on the Eberhart Point Trail or the Lower Two-Mile Trail, and you’ll find some in either direction if you go far enough.

The shrouded waterfalls near the Lower Two-Mile Trail

Many hikers hear but don’t see the cascading stream that runs parallel to the steep Lower Two-Mile Trail. The short trail provides a relatively easy stair-like path for hiking right up to the river’s edge for one of the most rewarding canyon-floor views. But, although the stream is only a few yards from the trail, few people attempt to travel upstream along its precipitous, rocky ramp.

If you do go up the stream bed under wet conditions, you’ll see spectacular cascades and waterfalls of five to 10 feet all along the way. A 15-foot waterfall is found at the point where some vertical rock walls make it impossible for anyone except experienced rock climbers to go any further. Hikers like me must go back down to the bottom in order to return to the parking area via the trail.

Click here for directions to the Lower Two-Mile Trail.

Other than the sights and sounds of the water, the stream is also a great place to see mountain laurel in bloom in late spring. In summer, you may see swimmers and sunbathers at a little beach-like area at the bottom of the trail.

SEE ALSO, WALK THROUGH THE MOUNTAIN LAUREL AND RHODODENDRON AT THESE PARKS

Little River Canyon is one of Alabama’s top attractions for good reason. The scenery alone draws most of the visitors to the rugged, wild river preserve. But a good number of hikers, rappellers and whitewater enthusiasts also enjoy the canyon by taking to the wilderness for some more adventurous activities.

Either way, the canyon is a great place to enjoy the tranquility that the sights and sounds of water and forest can offer. What hidden natural wonders will you discover?

NOTE: Careless or foolish behavior while hiking in gorges and visiting scenic overlooks can be deadly. I am not responsible for any injuries that occurs to any persons who fall from cliffs or into caves, creeks or rivers, at any of the locations featured on this website.

For more information and photos, check out my other canyon articles