Three of my regular riding friends and I set out from north Alabama in a pickup truck with a two-day plan to cover a 150-mile section of the Natchez Trace Parkway on our bicycles. We headed out for the limited-access, national parkway's northern terminus near Nashville early on a September Friday morning.

We hoped to travel up to 90 miles on both Friday and Saturday. The plan included one guy driving the pickup truck as a support vehicle while the other three guys traveled on their bikes. We took turns acting as support driver, swapping out every 15 miles.

Day 1
As we got underway, the automobile traffic was heavier than we expected, but it seemed to decrease more and more as we traveled further and further away from the Nashville metropolitan area.

The plan worked well as two of us covered 60 miles by bike while the other two covered 75 miles on their bikes. 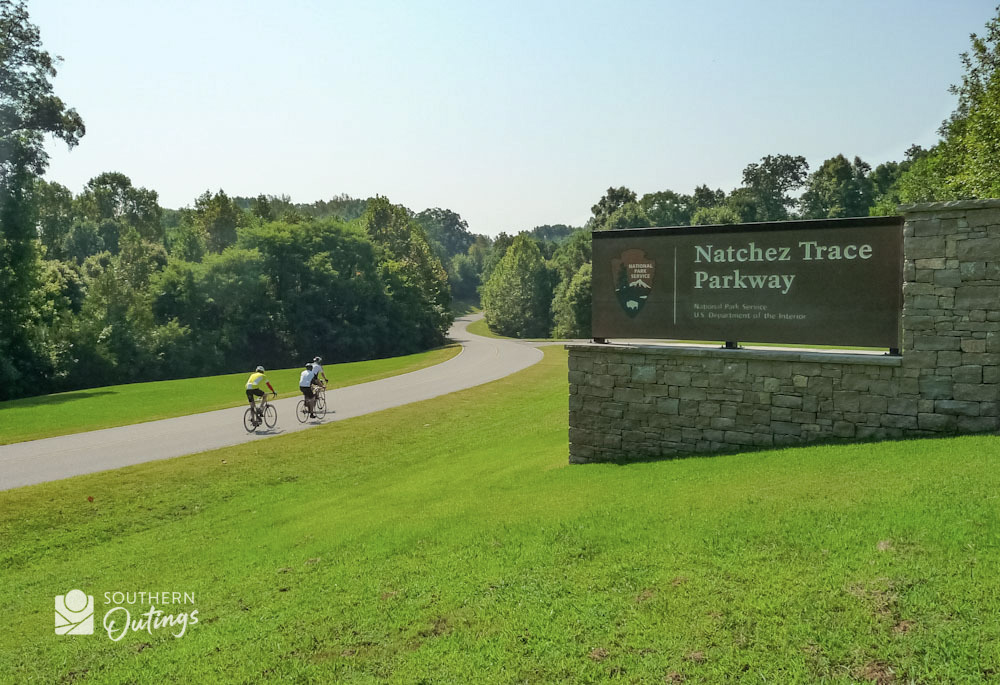 A scene near the northern terminus

By 11 a.m. the sky was clear, the sun was high, and it had warmed up to over 90 degrees. The heat caused our pace to slow as we started taking it easy on uphill sections and taking longer breaks.

On the first day we traveled from the northern terminus to near where the parkway intersects with the Waynesboro Highway (Tennessee Highway 62). This is between the small cities of Waynesboro and Lawrenceburg.

Between the riding, breaks and some short side trips to some of the historic structures along the way, we spent close to eight hours on the Natchez Trace that first day.

We stayed overnight at a hotel in Lawrenceburg that had a steakhouse restaurant almost directly across the street, and we enjoyed a good dinner there.

The scenery was as good as I expected. What I remember most about day 1 is the bridge about 4 miles from the northern terminus, taking a long break at Baker's Bluff scenic overlook, and the densely-forested areas such as those near the Devil's Backbone State Natural Area.

Day 2
Unfortunately, I was the only person in the group that got a good night's sleep. The others slept less than needed, or not at all.

Regardless, we returned to the spot where we concluded the Day 1 ride and headed south with the same plan of three riding bikes while the other acted as support driver. Plans were to go across the corner of Alabama and then to around Bay Springs Lake in Mississippi. That would give us about 75 miles for the day.

Day 2 had some notable highlights. First, the tiny town of Collinwood, Tennessee was right off the parkway about 15 miles into the ride. The town was neat and festive as they appeared to be preparing for a Labor Day celebration.

There was a lot more people in the town than usual, but many of the ones we encountered seemed happy to see us. We took a break at their Wayne County Welcome Center where we found clean restrooms and a good shade.

Another Day 2 highlight was the bridge over the Tennessee River 13.5 into Alabama. The wooded hills and the river combine for some nice scenery.

We were about 50 miles into the Day 2 ride and had traveled as far as Alabama Hwy. 72 near Cherokee. I had ridden 45 miles for the day at that point, was taking my turn as support driver, and was parked at the Hwy. 72 intersection waiting for the other guys.

When they arrived, they were spent due to their lack of sleep and the humidity. We all knew Hwy. 72 was the best way back home. So we all agreed to end the ride at that point. I was happy with 105 miles in two days.

We loaded up the pickup and headed east. All we could think about was where to eat, and a little while later we enjoyed an amazing lunch at Big Bob Gibson Bar-B-Q in Decatur.

We usually ride as a group of two to four guys only on Saturday. This was a Friday-Saturday adventure, and the only two-day ride I have participated in. I can't wait to try it again.

What cyclists should expect
The parkway features rolling hills with some flat sections, some great scenery and some historical sites that you should try to see. I would expect a weekday ride to have far less traffic than weekends, but it wasn't bad on the Friday and Saturday that we were there.

The entire parkway is designated as a bike route, but it's not like riding on a rail-trail such as the Silver Comet Trail. It's more like the country roads we often ride on in northeast Alabama and northwest Georgia. You will be sharing the road with some good drivers, and some bad drivers.

Just like practically anywhere else in America, don't expect every driver to use common sense, and to be respectful of cyclists. And don't expect a majority of them to pay attention the 45 to 50 MPH speed limits.

While most were courteous and careful as they approached and passed, we did encounter a couple of really bad drivers. As is typical, they tried to frighten us by speeding up and driving closer than necessary. But, we considered it fantastic to being treated as less-than-human by only two such drivers over a 120-mile stretch of roadway.

We plan to return to the Natchez Trace Parkway for another two-day ride covering a 120- to 150-mile section south of where we stopped last time.